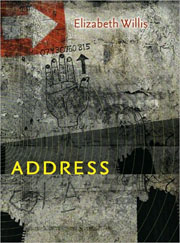 Let’s be frank: the nonce-genre of political poetry often deserves the suspicion and flinch it sometimes solicits. To paraphrase Freud, what does political poetry want? Sometimes, the political event that a given poem seeks to articulate hamstrings a preference toward obliquity on which so much of our most honest poetry depends. More generally, political poetry risks simplifying how we imagine the discursively thorny hedging of politics as both ideological inurement and sublime crisis. And even the worst political poetry is exonerated by certain readers on account of its good intent. Or from a different register: even bad political poetry, some straw-figure apologist might say, is to be commended for at least trying, in the hypothetical landscape of so many other poets playing games with their consumptive, distracted heads in ostrich sand.

The above ruminations can serve as context for the success of Elizabeth Willis’s Address, a book of gimlet-eyed stabs at the slippery conundrum of political frustration as the subject of lyric poetry. Lyric poetry’s particular capacities ought not merely resolve, rail against, or bear witness to conundrum. Willis’s new poems exemplarily reenact the awful and necessary confusions of political discourse as neither extrinsic nor intrinsic to the shards of subjectivity these poems feverishly gather.

A case in point, from Address’s second poem, “Take This Poem.” The title alone gestures broadly to both Corinthians (“do this, whenever you take it, in memory of me”) and Henny Youngman (“take my wife—please”). The Youngman reference—a joke elegantly pivoted between pedantic fidelity and exasperation—arises explicitly at the outset of the poem’s slender third stanza:

Such lines, like the litany of “takes” from which it is excerpted, never resolve into taken-for-grantedness, in part because each take spins idiom to the point where knowing what is being offered (earlier in the poem, the only slightly less ominous viaticum of “Take this spoon / from me, this / cudgel, this axe / Take this bowl . . . ”) leaves us, as imminent recipient, only slightly less unprepared for the terms by which something is taken, left, or given. The poem’s incessant anaphora produces a ghostly, white-noised potlatch—which, perhaps, would be the unsurprising consequence of such unmediated, fugitive leave-takings. We and the poem are uncertain if “Take my wife” is the miscarrying of a joke, especially as the line risks the over-determined pathos of “even if I meant / to keep her”mdash;somewhere between the innocuousness of nursery-rhyme pumpkin shell, marital breakdown despite intention otherwise, and marriage as failed (if not criminal) gambit. Uncertainty, here, has as much to do with Willis’s ruthless alacrity, as it does with the differently impeccable timing of the Youngman joke. The joke depends on pause, for which this poem, in unexplained exigencies verging in and out of panic, has no time.

The stakes of takes keep shifting, and the political crisis doesn’t surface from some conventional political tableau so much as absorbs it as one in a series—“Take this line / between breathing / and voting / Take this city / Take that expensive / ship . . . ” Taking a city may or may not imply some new Operation Ozymandias—the aggression of taking Bahrain, say; or in the speculative spirit of the first half of Youngman’s joke, take this city as example, as though it were Winthrop’s City on a Hill. That there is a line between breathing and voting doesn’t make any clearer on what we’re voting, let alone how we’d vote. The problematic of voting attaches to the poem as a whole, rather than the particulars of voting for any given candidate or proposition. Voting—a matter of vowing, wishing, interceding—speaks to our own wish to know how to take the poem.

Again, a lyric voice that simultaneously channels sodality, solidarity, aggression, salaciousness, and then some, suggests that more legible political moments depend on a reduction of the ethical ground this poem spins beneath our feet. Here are the poem’s final two stanzas:

Take this chamber
like a bullet
Take this house
and paint it black
or take it down.

Like a bricolage of old-time samplers and breaking news barrage, we are being told too many things, even as “telling” mis-describes the variegated forms of utterance the poem deploys. The “I” on the other side of these hanging chad rejoinders would freak Whitman out: “what I assume you shall assume” seems at best an irrecoverable nostalgia, of which the catalogues of Address are wary to the extent that we still despite knowing otherwise, wish to believe in such ostensible transparency. Willis’s Whitman is a perversion of an Emersonian poet. Address’s eponymous first poem calls the bluff of the deceptive magnanimity of “Crossing Brooklyn Ferry,” and ends up sounding more like Whitman than Whitman himself: “I is to they / as river is to barge.”

But to return to aforementioned takes: “Take Florida / Take Ohio / Take Wisconsin / Take Missouri” are both the most intelligibly political turns of the poem and the most vitiated, not least because we don’t know who is to take them, and because these bullet-points take the form of political flotsam upon which the “river” of previous poem floats. Political rhetoric, as we think we know it, washes up in the poem’s gutter, and the despair of passionate insistence unmoored from passion sluices into the poem’s severely careening and equivocal end. “Take this house / and paint it black / or take it down.” This parting “or,” as disruptive as the earlier move from take this take this to take that (expensive/ship), might be accommodating (an expansion of options following a poem that proliferates one single directive after another), or utterly demanding, an ultimatum. This sort of demonstrative waver resonates more sincerely with the politics of Address far more than “Take Florida / Take Ohio” (for example, please), which seem like politics-in-drag.

Willis’s exquisite ear for the perviousness of CNN palaver and older political argots yields a poetry that clears space for new forms of response and responsibility. Her synthesis of vernacular bolus and flinty archive itself reconfigures how we understand polis and poetry beyond the polestars of Plato or Maya Angelou. The hilarity of these poems is keen and affectively volatile; for instance, in “This is Not a Poem About Katherine Harris (R-13th District Florida),” we find the grammatically impeccable insistence that “When I came out against terrorism / I was not ‘coming out.’” This performance of impeccability recalls the sympatico between Willis and Youngman, a Balanchine-like revision of Jack Spicer’s imagined sympatico with Sophie Tucker. And just following the crisp equivocations of Willis’s Magritte/Katherine Harris dust-up, we find the opposite of idiomatic insistence—the opposite of performed (rather than ingenuous) grace. The second stanza of “Year-End Review” begins “Here lies the horse you rode in on.” The elegy is for the idiom as much as it is for the horse, an elegy for itself.

Address stupendously makes relevant and new the old-fashioned sense that we are bound in language. We don’t know in advance if the language is lace or turbine—or we too quickly presume that one sort of meticulousness precludes kinship with the other. There are poems in this collection that are as distilled and fastidiously idiosyncratic as Willis’s very best. In the context, however, of Address’s various ventriloquized discourses—sleazy, resentful, defensive, sly, amorous—the distillation suggests the great stakes (political and otherwise) of delicacy, the deceptively wonderful reprieve of silence in the midst of so much address. As Stein asks in “A Long Dress, “what is the current that makes machinery, that makes it crackle, what is the current that presents a long line and a necessary wait.” Willis’s response speaks for itself, but obliquely, as though a catechism for how we likewise might speak to each other and ourselves.