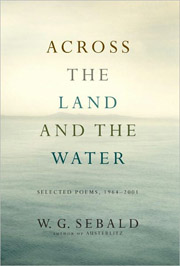 In the years since his untimely death in 2001, the German author W. G. Sebald has amassed something of a cult following. Praised for incorporating into his fiction haunting images of the communities lost to Nazism, Sebald produced in his novels an unsettling vision of darkness and dislocation. This vision, which contributed to the success of his most celebrated works, includingThe Emigrants and Austerlitz, plays an equally important role in Across the Land and the Water, a harrowing collection of his poetry translated for the first time into English by Iain Galbraith.

Divided into five sections, the collection provides an unfettered glimpse into Sebald’s development as a poet, beginning with a series of poems composed as a student in Freiburg. These poems, which Sebald referred to as “poemtrees,” offer the earliest hints of the themes that would appear so prominently in his novels. The complexity of the German landscape seems to have had a particular influence over the young Sebald, who in 1964 described it as a land of shadows and confusion. “For how hard it is to understand the landscape,” he wrote, “as you pass in a train from here to there and mutely it watches you vanish.”

Sebald’s preoccupation with place is infused with a deeper sensitivity to history in the second and third sections of the collection, which include poems culled from the period of his relocation to Norwich. Composed between 1975 and 1984, these works offer profound insights into aspects of the European past. From “bygone ladies of the court” to unnamed soldiers returning to “an older post in a different time,” Sebald’s gaze is sharper than in his earlier work. His perspective has shifted: once a bird, he has transformed into a mole, burrowing deep into a “reclaimed land.”

Perhaps the most significant—and exciting—moment of Across the Land and the Water comes toward the middle of its third section, when Sebald’s poetry adopts a variant of the narrative structure employed in his novels. In “Eerie Effects of the Hell Valley Wind on My Nerves,” Sebald depicts an emigrant revisiting “the cathedral square of a town he left many years ago.” The story presented in this poem is laced with a sorrow unique to Sebald’s writing: it is built, as Sebald himself concedes, on the poisonous mixture of memory and calamity.

In another poem, “Poetry for an Album,” these themes are again engaged: this time, however, their significance is measured in terms of their physical effects on the dispossessed. “For years now,” confides Sebald, in a moment reminiscent of Austerlitz, “I’ve had this same whistling sound in my ears and it troubles me greatly.” Were the roots of this whistling less catastrophic, the anguish of Sebald’s poetry might for a moment relent. Yet, there is no reprieve, for the poems collected here serve as a tribute to lives aborted by conflict. “Yearnings,” notes Sebald toward the end of the third section, are “easy to disappoint.”

The concluding sections of Across the Land and the Water include poems written during the final decade of Sebald’s life. From the outset, it is clear that these poems reflect the stylistic experimentation with which he wrestled as the millennium approached. The poems, like his novels, are ominous, but in their pursuit of a “dusty otherworld,” they reveal the mechanics of a complex imaginative process. Indeed, as Sebald approached that fateful—and fatal—day in 2001, the best of his poetry incorporated a tendency to defy uncertainty, to move from opacity to precision. “In the sleepless” is the not the only poem, for example, in which Sebald emerges from behind the mists: “Somewhere around Osnabrück or Oldenburg,” he writes, “on a patch of grass in front of a farm, a lone goose [is] slowly twisting its neck.” As Sebald defines his landscape, he proceeds with a remarkable degree of care: the uncertainty of being “around” one place or another slowly melts into the certainty of a farm, of a goose, of a twisting in time.

Across the Land and the Water serves, in the end, as a vital reminder of Sebald’s contribution to the literary history of Europe. The collection provides a valuable window into the construction of his novels, and works at the same time to enhance our understanding of the methods he employed to address a variety of challenging, often desperate, themes. As Sebald probed the darkness, he produced poems strident in their quest for totality. The last word is reserved for him: