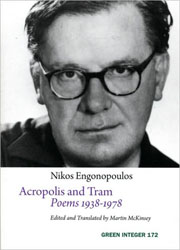 “He was a born orthodox, as charged by Surrealism as an electrical pole is by electricity. No one could touch him without agreeing to suffer a powerful discharge.”
—Odysseus Elytis, on Nikos Egonopoulos

Surrealism moved through Greece like a wildfire in the 1930s, a period in Greek history ripe for the transformative flames of destruction and renewal. Andreas Embirikos’s Blast Furnace (1935) is usually cited as the first realized surrealist work by a Greek poet, and Embirikos’s poems were ridiculed, but they did not engender the uproar created by Nikos Engonopoulos. Prior to Engonopoulos, surrealism in Greece remained largely clinical in its directive to liberate consciousness. However, as Kimon Friar notes in Modern Greek Poetry: From Cavafis to Elytis, Engonopoulos’s first two books were “explosive, daring and revolutionary, outrageously yoking together the most disparate objects as in obedience to Lautréamont’s notorious ‘beautiful as the chance encounter on a dissecting table of a sewing machine with an umbrella.’ A girl’s hair is likened to cardboard, her mouth to civil war, her neck to red horses, her buttocks to fish glue, her knees to Agamemnon.”

Perhaps more than any Greek poet, Engonopoulos took surrealism furthest, largely because he practiced both writing and painting (devoting himself primarily to painting after 1948). He also leaned more heavily upon the anarchist roots of Dada than his contemporaries, even translating Tristan Tzara in 1938. The poems in his first two books, Do Not Speak to the Driver (1938) and The Clavichords of Silence (1939), fuse the provocation of Dada with surrealist juxtapositions, exploding Greek poetry into the then unknown. In 1939 he also showed his first paintings, cementing his reputation, as his translator Martin McKinsey describes, “as the ‘bad boy’ of the Greek avant-garde.”

Born in 1910, Engonopoulos came of age during the cultural upheaval of modernism (George Seferis introduced modernism to Greece through his translations of T. S. Eliot and through his own poetry, and Embirikos brought the first books of surrealism from France). He also confronted the dictatorship of the Metaxas regime of 1936–1941. In late 1940, Mussolini marched upon Greece, followed shortly thereafter by the Nazis. Like other Greek intellectuals considered “troublemakers” by General Metaxas, Engonopoulos was drafted and sent to the front. Following a particularly gruesome battle on April 13, 1941, he was taken prisoner by the Germans and held in a work camp until his escape, when he wandered “over half of Greece on foot.”

Upon his return, “a friend of the Socialist Resistance” asked Engonopoulos to compose some topical poems for the Resistance in the tradition of Greek folk songs, but knowing the poet’s reputation, he requested something “less ‘incomprehensible’ than his work to date.” Engonopoulos wrote a series of traditional poems as well as his great book-length poem, Bolivar (1944). Yet Engonopoulos is not best known for these poems of social resistance, and rightly so. While Bolivar exhibits skill in fusing surrealist humor with the Greek folk tradition, and is cast in the democratized line of Whitman, it represents only a small period in Engonopoulos’s lifelong practice of surrealism, to which he devoted himself for the next forty years in semi-seclusion.

This is not to suggest that Engonopoulos was not a poet of social conscience. His greatest contribution was to the Greek language, which had been caught in controversy for a century. His often baffling poems fused the common language of Greek (Dimotiki) with the written language of government and newspapers (Katharevousa), which emulated ancient grammar—the language of poetry and the academy. While Kostas Palamas had already liberated Greek poetry by writing in Dimotiki at the turn of the century, Engonopoulos took this further. He wrote anti-poetry, melding words, disregarding grammatical usage, even incorporating localisms and terms borrowed from Turkish. The result was a charged discourse that also complicated notions of class by allowing language to mirror the breakdown of a rigid class structure—reflected, obviously, in the markings of speech.

Engonopoulos’s middle period from the 1940s is perhaps his most accomplished. “First Light,” for example, is marked with humor:

once indeed when they raised a bronze statue of me
in some square or other in Piraeus
something
was placed
silently
at my feet
resembling
—I couldn’t see much from up there on the pedestal—
a holy relic
or else a copper
brazier
burning with
live coals.

Like Tzara, Engonopoulos adopts self-deprecation in order to critique cultural idolatry. He moves well beyond humor in his prose poems of this period (his genre-bending, another strategy to interrogate poetic forms), in which writing intermingles with the concerns of visual art. In “Four and Ten Subjects for a Painting,” a prose poem dedicated to the surrealist Raymond Roussel, Engonopoulos anticipates postmodernism, ingeniously presenting fourteen “subjects” for a painting, each of which revises earlier depictions, forcing a recursive reading of the text. Number 1 begins, “Three men. Two of them seated. The third, standing with his back turned to the room’s only window, lets his mild gaze stray across an infinite space,” while Number 2 says, “Three men. Two of them standing, the third is seated in the middle of the elegantly furnished interior, on an ancient marble capital in the Doric mode.” Number 4 simply reads, “Three men, seated,” and Number 5, also brief, extols, “Three men seated. One of them wears a beard; the look in his eyes is extraordinary.”

Modern Greek letters owes a tremendous debt to Nikos Engonopoulos for his daring and courage to push Greek poetry beyond its previous boundaries. As it has done with so many other “lost” writers, Green Integer has made another masterful poet available to our age.