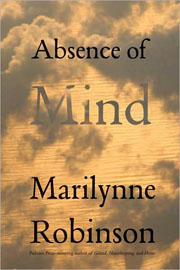 Any reader of Marilynne Robinson’s extraordinary works of fiction has experienced how marvelously she explores the mysteries of human existence on—as she calls it in her new work of nonfiction, Absence of Mind—our “tiny, teetering, lopsided planet.” Robinson is fascinated with consciousness and with the mind’s place in the universe, and her novels open readers to the worlds within the world of each of her characters’ particular corner of the swirling cosmos. In Absence of Mind, Robinson addresses these issues directly, confronting the mind head on and arguing for its existence as an entity much larger and more elusive than any mere biological or evolutionary function.

Written in four parts and commissioned for the Dwight Harrington Terry Foundation Lectures on Religion in the Light of Science and Philosophy, Absence of Mind has a clear mandate and agenda. The Terry Foundation’s “deed of gift” states its desire that through its series of lectures “the Christian spirit may be nurtured in the fullest light of the world’s knowledge,” and while Robinson allows for an expansive and encompassing conception of Jewish, Christian, and other spiritual wisdoms and philosophies, her objective is clear. A believer in both scientific inquiry and religious mystery, she wishes to reconcile what many on both sides of the science/religion debate see as irreconcilable, but rather than actually pursuing such a course, her book takes the stance of a factious attack on what she refers to as “the closed circle that is called modern thought.”

Railing against positivism, behaviorism, neo-Darwinism, Marxism, and Freudianism, Robinson points out how each of these systems of thought not only offers an incomplete view of the world, but also how incompatible they are with each other when taken as a whole and accepted as a collective view of modernity. One of her most salient criticisms is in pointing out the fallacy of what she describes as a key dictum of each of these systems: “the notion that we as a culture have crossed one or another threshold of knowledge or realization that gives the thought that follows it a special claim to the status of truth.” Although the discoveries of Galileo, Darwin, and Einstein certainly cross thresholds toward a more workable model of truth, Robinson rightfully questions the common contemporary mindset that holds that we were in error before a certain moment and only now we see clearly. This has also been the mindset of many of the world’s religions and metaphysical philosophies, however, and in honoring their valuable insights and wisdoms, Robinson somehow fails to mention their own exclusionary claims to veracity.

Leaving the poets and saints and mystics in peace, Robinson’s main targets in Absence of Mind are contemporary writers such as E. O. Wilson, Richard Dawkins, Steven Pinker, and Daniel Dennett—writers whom she characterizes as taking a derisive stance toward religion and whom she derisively labels as “parascientific.” One of her repeated methods of refuting them is to call into question the very character of their thought, and many of her arguments consist of choosing a vulnerable sentence in their books (and in the case of Rorty and Vattimo’s The Future of Religion, an introduction written by the book’s editor) and dismantling, discrediting, or lampooning it. At one point, she even refers to an author’s colloquial explanation of altruism (which is one of Robinson’s main arguments against neo-Darwinism) as “sophomore-speak.” While her own prose is high-handed, one of the great disappointments of Absence of Mind is that Robinson fails to dazzle the reader with the flights of insight that this book’s subject matter should have generated in a writer of such talent and profundity, instead maintaining the cold and inelegant register of a defensive (and often offensive) polemicist. This hardly seems the work of the author whose first novel, Housekeeping, inspired a generation of writers to pursue the marvels of both the world and the word.

The greatest contribution of Absence of Mind comes in the book’s third chapter, “The Freudian Self,” in which Robinson recontextualizes Freud and his times in fascinating detail and with an extraordinary command of how Freud’s works interacted with the worldviews that surrounded and inspired his own. Her ultimate aim in this section is to negate certain Freudian and post-Freudian concepts that in her view discount the idea of the individual mind living in an individual time, and with a deftness of thought and knowledge and style, she largely succeeds, turning her double-negative approach into a positive contribution to Freudian criticism, as well as to the ongoing exploration of how the mind exists in time. Whether you find yourself agreeing or arguing with Robinson’s conclusions (or agreeing and arguing with them), this is a classically rigorous and beautifully hewn essay that—like much of Freud’s best writing—is valuable both as an intellectual artifact to be pondered and confronted and as a work of literary artistry.

Despite its overall tone of enmity—and despite its hand-wringing apprehension that our existence is being impoverished by the perils of “modern thought”—Absence of Mind makes a positive and often successful effort at showing us how both science and the mind are far more expansive and inexplicable than many schools of thought would have us believe. It may be unfashionable to think of the mind as a mysterious entity that exists as something much larger than our already large brains, but when Robinson delves into the farthest interior and exterior worlds and drops her offensive defensiveness, she reveals in herself a mind that serves as a living example of many of her best points. Perhaps few will be convinced by this book—its arguments are couched in terms more suitable to those who will probably disagree with it, while most sympathetic readers will be turned away by its antagonistic tone—but Robinson’s learning in all the fields she discusses is remarkable, and her ideas will certainly impress themselves upon the mind of any serious reader, regardless of whether that mind decides to let itself be changed.