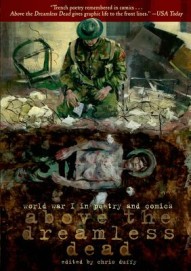 World War I in Poetry and Comics
Edited by Chris Duffy
First Second ($24.99)

A master class in the formidable strengths of the comics medium, this compilation bring unlikely source material—poetry about the first World War—to vivid life. The editor has drawn impressively from the ranks of today’s indie comics practitioners to insure that the metrical vocabulary of a century ago finds a contemporary voice; Sammy Harkham, Kevin Huizenga, and Anders Nilsen all turn their smart, postmodern inventiveness to making truly moving pieces. Expressionists such as Peter Kuper and George Pratt are expectedly riveting, as is horror master Stephen R. Bissette (who does a simple two-page spread on a line of Kipling’s); all echo what Patrick MacGill writes in his Eddie Campbell-drawn excerpt: “That is what it means, this war: destruction, decay, degradation.” It’s an inspired choice to have Pratt illustrate several pieces by the great Wilfred Owen, and to have Hunt Emerson, whose exuberant style might not otherwise fit, render a few rowdy soldiers’ songs of the era. If the poetry is necessarily by an all-male contingent, not so the comics, for women cartoonists are well represented; Sarah Glidden, Lilli Carre, and Danica Novgorodoff do especially fine work, as does Carol Tyler, who makes her Robert Graves adaptation a loving extension of her landmark autobiographical work about her soldier father. The book ends with deft notes by each cartoonist explaining their approaches and short biographies honoring the poets, virtually all of whom experienced the war firsthand. Hats off to Chris Duffy for an expertly curated and produced anthology.