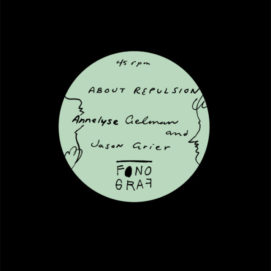 About Repulsion, an EP by Annelyse Gelman and Jason Grier, is a diaphanous six-track exploration of power dynamics, the intersection of the quotidian and the profound, and the way in which technology creates a fragmented existence with edges of clarity and isolation. While each track is gorgeous, haunting, and rife with gems, I want to focus on the two tracks that come on the vinyl edition of the EP, “Maxes” and “Does It Make You Feel Alive to Sing” (the rest of the songs are offered via a digital download card). Both of these tracks encapsulate the fundamental elements of the album, which blends algorithmic lyric structuring and sound samples that range from the highly engineered to live field recordings. Ornamented and grounded by Gelman’s hypnotic vocals and poetry by Max Ritvo, Brigit Pegeen Kelly, and Carl Phillips, the result is a layered soundscape that repels hierarchy; rather than privileging any kind of sound over another, we enter an ecosystem that is as delicate as it is confident in its message.

“Maxes” begins with the improvisational hum of instruments warming up before a symphony, a kind of chaos that precedes organization—what pre-cognitive speech would be equivalent to in the language of instrumentation. Here, there is a kind of binaural quality, an inability to distinguish whether one is hearing brass or strings, music made by mouth or by hand. Two separate kinds of action here mold into one, not unlike the quality of a poem itself, taking on the action of both oration and dexterous work. Then we’re abruptly curtailed into a recurrent plucked-string motif in waltz time that immediately grounds the song; the waltz time is an important choice because it is a signature that, in dance, relies heavily on the power dynamics of both the passive and leading partners. In the song, there is a tension between the flow of Gelman’s voice—its ambient, feminine tonality and lyrics that are impressionistic and associative—and the curt, minimalistic plucks of an instrument that we all know is capable of more evocative sound. This tension reflects a larger quality of this work as a whole: the constant battle between the emotionally intense, intuitive qualities of womanhood and the restraints society places on women.

The first lyrics we hear echo this sense of dependence and confinement: “Like a mouse in a cage, I move toward you, I expect a hand around my neck to put poison in my head.” There is something erotically charged at play here. First, we begin in a simile: the very first word of the entire EP is “like,” which sets the precedent that factual, essentialist forms of communication are not the kind of agency our speaker needs or will employ. We might expect the ‘you’ of this poem to be a lover (as it is in most songs), and this is compounded by the velvety coo of Gelman’s “I move toward you,” a magnetic kind of attraction, though certainly a wary one, given the “mouse in a cage” power dynamic. There’s a deftly set up subversion of expectation in the lyrics that follow—“I expect a hand around my neck”—which is both erotic and potentially violent, operating in the ambiguity of the grip a powerful person can yield: delicate and tender, acknowledging the beauty and frailty of its subject, or a painful chokehold used to manipulate and wield. The line that follows solidifies the toxicity of the relationship: “to put poison in my head.” To follow the analogy, this kind of animal testing will certainly do physical harm to the mouse, and worse yet, the mouse is used to this and expects it, yet still moves toward the scientist. This image is devastating because women are too often subject to this kind of “testing,” to poison put in our heads by those who would control us politically, romantically, and professionally. And, like many who are victims of abuse, we still move towards the “you,” are drawn back to the violence that is familiar. 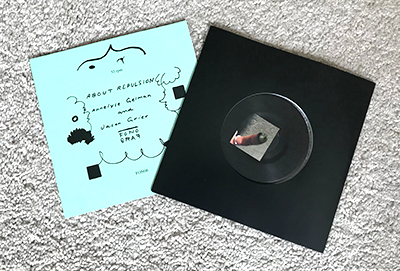 “Maxes” takes its title from Max Ritvo’s “Poem to My Litter,” a poem about the use of laboratory mice in treating the author’s cancer that deftly explores the convergence of power dynamics. The scientist, the abuser—anyone in power—is only powerful if they have a subject to perform that power on. In the song, this convergence is revealed in the overlay of vocal tracks, which both dissect and blur the lines: lines like “some good in you is of me, even my suffering” create a kind of film over subject pronouns, the “you” and the “me” beginning to feel interchangeable, neutralizing the idea that one party contains good or suffers. Later in the song, a stringed instrument (cello) emerges in its traditional form, played by bow. Minimal though it may be, its entrance is sad, ominous, and lush, and gives the listener a cathartic sense of release into the embodiment and utilization of the myriad qualities of life.

In “Does It Make You Feel Alive to Sing?” understanding emerges backwards and through cyclical listening, as what grounds and contextualizes the emotional and evocative language of the beginning of the song is presented to the listener as an audio recording at the end. What initially feels like a simple, uplifting question (“does it make you feel alive to sing the same song every day?”) is predicated on the understanding that “to feel alive” means more than how alive one inherently is. This distinction, between being alive and feeling alive, is crucial.

The simplicity of this notion is reinforced by the reverberating electric guitar notes that minimally decorate the intro to the song. We’re rotated through a variety of banal greetings and activities, perhaps the components of that same song we sing every day. Lyrics like “take the kids to school” and “hello, how are you, I’m okay” repeat and reinforce the quotidian; they simulate the mechanized sound bath of daily life in which we submerge ourselves. The distance between individuals, of truly being able to know another person, is wide in this song: “She said she knew me / she only knows my name.” This distance can only be merged in extremes, in eroticism, in violence, in art. As the chorus of haunting voices begins to envelop the song itself, additional voices emerge—voices that puncture that sound bath of life, binding it to an alternative sense.

The poem that emerges in the last minute of the song, by Bridget Pegeen Kelley, is notably titled “Song,” which tangles the listener’s conception of what song is, indeed, being sung. In the recording of Kelley’s voice, we hear a disturbing narrative of the murder of a young girl’s pet goat, its “head hanging by ropes in a tree.” Surreally, the goat head sings at night, its voice mistaken for the coos of a songbird. Kelley recounts how some boys hacked up the goat; the tale itself is a parable, but the clip offers no overt moral, as Kelley’s voice is overtaken by static. No doubt, we as listeners are witness to the cruelty of the young boys, the senseless violence of their act. There is an inherent sexism to this violence, an unnecessary and possessive sacrifice of pure blood either out of fear or for entertainment, or both. Even before Kelley’s voice begins, a male voice is heard detailing the girl’s desperate search for her missing pet; this voice competes with Kelley’s as well as the mixed audio of the track, and the comprehensible fragments of his narrative cast a daunting and subjugating lens over the parable. Power dynamics that were evident in the intimacy and codependency of “Maxes” are here more overt.

Both of these tracks evoke the granular particulars of sadness, loneliness, and lack of power, as well as their counterparts: transcendence, wonder, community, and empowerment. Song for Gelman and Grier is not a weapon, but a tool to dig into the vast expanse of what makes human impulses so rich and complicated; in using this tool, they create a lasting, gorgeous art object of their own.