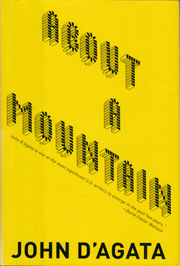 For readers who know the genre-bending lyric essays that John D’Agata writes about in and selects (as an editor) for Seneca Review, and for those who have read his own high-concept, high-construct poetic essays in Halls of Fame (Graywolf Press, 2001), About a Mountain may be a surprise. Reading at first like investigative journalism and morphing into a compendium of facts and quantifications, morphing again into personal and collective takes on forays, fears, habits, and failures, the book looks and acts like conventional prose rather than a rebel child of poetry.

For example, there are sentences that cohere into paragraphs instead of remaining a sequence of resonant lines surrounded by white space. There are interviews with experts and laypeople, snippets of personal experience, descriptions of Americana, examples from history, relentless numbers, possibilities, and associations—okay, D’Agata fans will recognize the list-making urge. Here, though, an objective framework of minimalistically linked sections reflects the methodology of both journalist and crisis counselor—who/what/when/where/why/how/why/why/why—and transforms, through layering and a rising pitch, into a subjective howling for all that is and could be lost. Most different from Halls of Fame, a consistent, forward-striving propulsion drives the prose, supported also by both the rapid-fire monosyllabic headings and the black and yellow crime-scene ticker-tape of a book jacket.

This is not so surprising for readers of D’Agata’s running commentaries about the history, form, and function of the essay as editor of two (out of a proposed trilogy) recent anthologies, and in special “lyric essay issues” of Seneca in which he expands and even recants some of his earlier and more stringent definitions of the form. The overall project seems to have wandered from the “how” of things into the “why,” and in reading About a Mountain, we come to know that “why” is dangerous territory. Risk still informs, resides, and rattles here, in unexpected ways different from more obvious structural manifestations.

Explicit topics: a summer in which the author helped to move his mother to Las Vegas and stayed; the politics of nuclear waste and Yucca mountain; a teenager’s suicidal jump from the Stratosphere Hotel; signs, sales, semiotics; human nature’s persistence for meaning-making; Edvard Munch’s The Scream. Implicit topics: the half-life of vernacular; the pull toward decay and decline; aggregates; how we need containment; countlessness; the leaps between experience and language; the reach of each primal voice.

You’ve got to read this book the whole way through. Its verve and profundity live in accretion, in connections made from the juxtapositions, sheer plethora of cataloging, and the exposé of language’s uses and methods. Part encyclopedia, part travelogue of the human animal’s posturings and vulnerabilities, part “Yes, there will be singing, /About the dark times” (Bertolt Brecht, from the poem, “Motto”), About a Mountain houses unabashed poignancy in addition to serious social and moral critique.

It’s very difficult to excerpt from this book because it’s an ecology, an archeological site of a civilization’s linked artifacts in which context is everything. Ultimately, the main character here is THE SIGN, in its literal, glitzy bulk (we are, after all, in Las Vegas), its undercurrents and blatancies of persuasion and propaganda, its attempts at representing experience. “Attempts,” from the French essai, conflates all the themes and scenes of the book, demonstrating the “meta” self-referential aspect, the ars poetica (ars essayica?) strand of discourse present to some extent in most of D’Agata’s work, by which the topic of essay writing itself ebbs and flows throughout the whole.

Late in the book, a kind of thesis statement to this effect emerges. Here is the author, reiterating the assessments of the Department of Energy’s panel of experts, assembled for the purpose of formulating a sign to mark Yucca Mountain’s nuclear waste storage facility: “We must find ourselves, the panel says, having an experience: an essaying into the purpose of what’s apparently purposeless, an essaying that tries desperately to cull significance from the place, but an essaying, says the panel, that must ultimately fail.” It’s not a plot spoiler to say that, as it turns out, a marker for a nuclear waste site and a metaphorical association with a teenager’s suicide may ultimately reflect a sense of meaninglessness.

About a Mountain, then, in addition to being a record of these experiences, is, in itself, an experience. It’s a rogue sign, an addition to and an accretion of the officially sanctioned one at the site, and the headstone marker of a troubled kid. Wildly informational, textural, guttural, this is what this extended essay does: though it cannot and does not exactly replicate the world, it makes a world, about the world, singing.