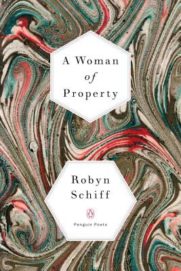 Robyn Schiff’s third poetry collection, A Woman of Property, lyrically mixes together Greek historical figures with the qualms of motherhood. Implementing unusual forms allows Schiff to bring together “the ancient tragic scallop-shell- / shaped theatre at Ephesus” with her son’s “dreams of the wolf snail”. Her first-person narration paints a picture of historical figures in their prime even as it connects their past struggles to her own today.

Schiff’s Greek references, placed sporadically throughout the collection, are fortunately never overwhelming, and are often enlightening when it comes to her concerns as a woman. She begins by alluding to confinement, writing, “Greek tragedy / staged around a doorway / the imagination strains to enter”, and continues this allusion when she brings in mythological stories that focus on women. From Antigone, who committed suicide because of her entombment after mourning her brother, to Iphigenia, who was killed by her father as a sacrifice, Schiff declares her own place among these women, stating, “I am a woman / of property. The milk of the footlights”. Juxtaposing Greek mythology with life’s mundane task of laundry, Schiff challenges the idea of what it means to be a woman—“Get back / in the house, I / said to myself, and made myself useful”—highlighting the different, but still pressured, expectations of women throughout the ages.

Experimenting with form, Schiff utilizes the full width of the page to establish one of her most important themes--the hardships of motherhood. She also uses italicization to create an embodiment of dialogue:

Schiff’s first-person narration deepens our understanding of her anxieties towards being a good mother. The parallel between this story—her failure to cultivate her land—and her confession that she “didn’t do anything exactly” foreshadows a later poem when she asks, “How will I know / what to do, I wondered”. Schiff uses two poems that are almost (but not quite) the same to suggest that there are aspects of a mother’s life that she can or cannot control. “A Doe Does Not Replace Iphigenia on the Sacrificial Altar” and “A Doe Does Replace Iphigenia on the Sacrificial Altar” can be read as Schiff’s attempt to relieve some of her own motherly anxieties.

In the midst of the collection are explicit remarks about the swine flu virus, global warming, and the attacks of September 11; these contemporary tragedies add yet another component to Schiff’s poems regarding cultivation, mythology, motherhood, science, and the supernatural. In the end, A Woman of Property has the ability to elevate us into the lives of infamous Greek figures while taming us to the ground, where a gardening task is “like being delivered / into my own body”.