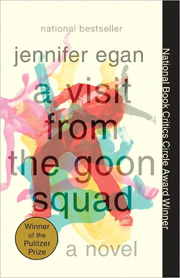 “It is in ourselves that we should seek to find those fixed places, contemporaneous with different years.” This epigraph, from In Search of Lost Time, is well chosen, because A Visit from the Goon Squad is Proustian in its ambitions—not just in its themes of capturing the essence of time, memory, and the slippery concept of self, but in its innovation of language and form.

Jennifer Egan set herself this challenge: To make each chapter self-sufficient and from a different point of view. The chapter written exclusively in PowerPoint is perhaps the most original, but there are also chapters in close third person, first person omniscient, and second person, plus flashbacks and flash forwards into both the present and into a future that hasn’t happened yet. Chapters that move forward in time, then back, then forward again, seamlessly, like a tape loop turned into a time loop. Near future dystopia, 1970s punk-rock nostalgia. A page full of footnotes. A celebrity magazine profile written from jail. Novel as concept album.

But Egan is not just a piano player showing off how many keys she can nail at the same time; the most technically innovative chapters are also the most moving. Furthermore, A Visit from the Goon Squad is witty, fresh, and even laugh-out-loud funny. Sasha wonders if her therapist is “one of those escaped cons who impersonate surgeons and wind up leaving their operating tools inside people’s skulls.” Bennie, Sasha’s boss, loves old songs for “the rapturous surges of sixteen-year-old-ness they induced.”

The tone varies widely, including broad satire; a quartet of chapters that form a mini coming-of-age novel-within-a-novel; and a tale of regret, told by Jocelyn after losing twenty years of her life to heroin. The satirical pieces are not the most moving parts of the book, but they are some of the funniest. Who can resist banter like this: “How was it that of all the names considered—Xanadou, Peek-a-boo, Renaldo, Cricket—they’d ended up choosing the single one that melded flawlessly with the innocuous Crandale namescape?”

A Visit from the Goon Squad could keep a squadron of graduate students busy deciphering its literary and cultural references, but it is also a fast, glittering read, littered with cocaine sniffed from a young woman’s naked bottom; a record producer speckling his coffee with gold flakes as an aphrodisiac and spraying mosquito repellent in his armpits; near-fatal mauling by lions on an African safari; a kleptomaniac former prostitute looking for a “fake boyfriend” to fool her father’s spies; an unnamed dictator coaxed to smile for the camera for the first time by a B-list actress who turns predatory; boiling oil accidentally dripping from party decor and marring the beauty of every “it” celebrity; and a former rock star turned has-been launching a “suicide tour” for the publicity. Both intellectual and rollicking, wicked fun, this collection of self-contained stories becomes a novel with the fireworks of a grand finale.