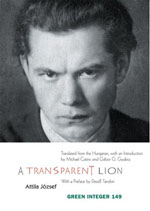 “Whoever is born to a mother is betrayed in the end,” writes Attila József, the legendary Hungarian poet, in his poem “Late Lamenting.” József had much to lament. His father died when he was three, his mother when he was fourteen. In 1924, the Hungarian government accused him of “blasphemy” for his poem “Rebellious Christ”; he narrowly avoided a prison sentence. Later a professor kept József from teaching his poem “With a Pure Heart.” Suffering from severe depression, he stumbled, or more likely threw himself, under a train on December 3, 1937; he was 32.

József published seven books of poetry in his short and troubled lifetime, and after his death seventeen collections came out in Hungary, notes Michael Castro in his informative introduction to A Transparent Lion, the last translation of József’s work to appear in the U.S. While considered Hungary’s greatest 20th century poet, József’s reputation extends far beyond his homeland and his time. Despite József’s frequent use of rhyme, which Castro and Gyukics preserve, his poetry feels quite contemporary.

Take these lines from a self-portrait entitled “Attila József,” with their mix of matter-of-fact acidity and playfulness:

He liked to eat, he resembled God in some things.
He got a coat from a Jewish doctor,
and here’s how relatives referred to him:
Don’t-want-to-see-him-again.

No doubt his intensity and his mercurial moods, not to mention his constant requests for money from family and friends, would have made József difficult to deal with. However annoying he may have been, though, his genius can be clearly seen. Look at how he ends this self-portrait: “His decay was nation-wide; // but, well, do not be sad.” He can shift from the personal to the political with ease.

It’s this expansiveness that evokes the Peruvian poet César Vallejo. Though Vallejo dissected language while József did not, both poets address the unfairness of life, both demonstrate self-pity and self-mockery, and both poets write as if death perches on their shoulders. The following lines of József’s could easily be mistaken for Vallejo’s: “It’s ridiculous, I haven’t wronged them / more than they’ve jerked me around” (“Thus I Have Found My Homeland...”); “it isn’t me who shouts, it’s the world that rumbles” (“It Isn’t Me Who Shouts”); “the suffering of the conquered makes me suffer” (“By the Danube”).

The two poets also share a political stance toward the have-nots. This stanza from József’s “In a Light, White Shirt” captures this paradoxical class consciousness:

The wealthy don’t like who I am
Unless I live oh so squalidly.
And the poor, for me, don’t give a damn.
Their comfort diminishes me as a man
where to love is ignominy.

The poor have learned to accept their status, which angers József, just as it does Vallejo. Yet both writers identify with the poor, even while knowing this further isolates them. That “for me” implies that the poor don’t particularly care about the woes of this young poet; their own worries keep them busy. No wonder both poets turn to dark humor for comfort. In “For My Birthday,” József mocks his talent with relish: “Thirty-two I have turned today— / this poem by surprise came my way / titty /ditty.” While Vallejo would not employ the rhyme, he’d share the sentiment.

As can be seen in the lines above, Castro and Gyukics have given us a lean and informal translation. József in all his complexity comes across loud and clear; the voice is intimate, though paradoxical. The cover photo of the young poet with creased brow furthers a sense of contemporaneity; you feel you might meet this guy at a coffeehouse or bar. My only complaint with A Transparent Lion is that it isn’t larger. We need a translation of all the poetry of this enigmatic and fascinating poet.