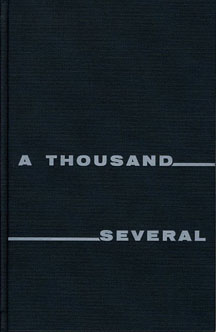 In A Thousand Several, Emily McVarish explores the space of a book through its relations to cityscapes. As if she has positioned her reader at a busy intersection, each page becomes a place that text and image move into and out of. In this way, the experience of reading A Thousand Several feels more like turning the pages of a flip book animation than following a continuous line of text from left to right and top to bottom.

The sense of motion produced by figures photographed in the act of walking, extends McVarish’s earlier experiments with duration and presence. In both A Thousand Several and Was Here (2001), words and images are the empty shells of what has already passed. By rendering the figures as silhouettes, outlined forms, or monochrome cutouts, McVarish calls attention to layers of blankness that accompany forms of representation. Additionally, by flattening three-dimensionality and cutting the figures out of their original context, she produces a page-space at once strange and familiar. On these pages, both image and text float until they intersect with another figure; this intersection cuts and connects at the same time. 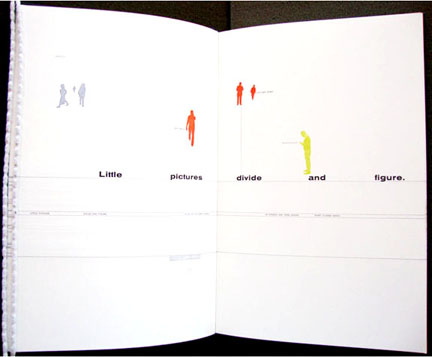 It’s these “risk-slits” and “torn encounters” which surface as the subject of A Thousand Several. Once the “thin outer coating” of the book is opened, the “several” of the title becomes “sever al” on the title page, suggesting that the wholeness of words is merely the layer most often seen. “Kept in parts,” and “built in passing,” language and image are understood here as the sum of letters, outlines, and shadows, and as the “byproduct” of what is now over. By these terms, cuts seem to bleed glue.

The hyphen may be the perfect model for this cut/glued condition of language, since it literally “divides and figures . . . streets and open spaces” on the page. Straddling distinctions between text and image, the hyphen can be both a punctuation mark and a line. Here, thousands of hyphens strung together into dotted lines create the cross section of a “street” which cuts across each page. 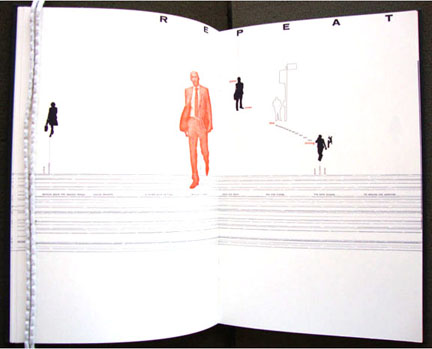 Often, these lines darken a large stripe across the book, which appears strangely flat in relation to the depth suggested by the floating figures. However, like McVarish’s figures in which there is a range offered between silhouette and outline, a dotted contour also indicates this street. In this way, the street demarcates a space for occasional crossing and for the traffic of words.

Fluctuating between fullness and emptiness, the street refigures a dilemma of language and image—a dotted line fills in space at the same time that it draws the line to be cut along. The street then alternately makes visible and invisible the sedimentation of cut-marks. As can be seen in the second image, if we drilled all the way through this sediment, we would find ourselves in another world, or at least on the inside of a mirror. The implications of these organizations are further compounded when we realize that the cross section of this street might also be seen as the cross section of a book.

What takes shape in McVarish’s work, through the interaction of grounds, forms, and the text itself, is the idea that a word or an image is always a figure in unseen motion. Like a city, A Thousand Several is an amazing trace of its struggle, holding open the space of its passing by.