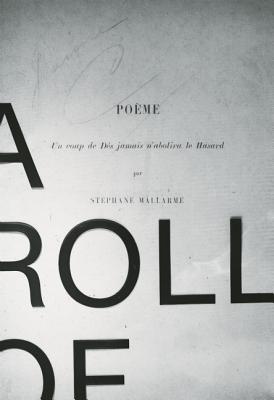 Robert Bononno and Jeff Clark's A Roll of the Dice is the latest in a slew of recent translations of Stephane Mallarmé's Un Coup de Dés Jamais N'Abolira Le Hasard and it brings a different aesthetic approach to this challenging poem. For nearly half a century, Daisy Aldan's 1956 A Throw of the Dice Never Will Abolish Chance has been the canonical translation into English. It was later reprinted (1992) in a boxed, limited edition with eleven black and white and four color lithographs by minimalist Ellsworth Kelley. Several translations followed, including Brian Coffey’s awkwardly titled Dice Thrown Never Will Annul Chance (1967, Dufour Editions). Marcel Broodthaers offered a version in 1969 with all of the text blacked out, leaving clear the ideogramic underpinnings of the poem and its layout.

Stéphane Mallarmé's original manuscript was published in 1897 in the journal Cosmopolis. The editors did not honor Mallarmé's fundamental spatial intention, which was to print the poem across two pages; that break in tradition, one that forces different reading behaviors, was one of the revolutionary features of a new aesthetic that opened up any number of experiments through the 20th century. Cosmopolis did honor the expansive white space and different fonts that Mallarmé intended. Page spreads aside, Mallarmé was not satisfied with Un Coup de Dés, and immediately began revising the poem, revisions intended to be published in 1898 with illustrations by Odilon Redon. Mallarmé died in 1898 and the project was abandoned, but not before Redon completed several lithographs. Sixteen years later, the 1898 manuscript was reconstructed and published, sans illustrations, by La Nouvelle Review Française. This 1914 edition followed the poet's intentions with respect to space and to the variations in typeface and size, both of which were used to exploit the poet's interest in subordination, but also to highlight the poet's interested in the poem embracing "subjects of the pure and complex imagination or intellect" (from Mallarmé's preface, variously translated). As such, one can see the subordination of one after another gesture of imagination, set to modify higher-level ideations, and, ultimately, the words and phrases therein of the predicate jamais n'abolira le hasard. Significantly, the subject of the title/sentence, un coup de dés, has no modifications, subordinate or otherwise. Of equal importance to the 1914 publication and subsequent translations have been his extensive notes (see the pdf noted below) as well as his preface to both the Cosmopolis and La Nouvelle Review Française publications.

The past ten years have seen multiple translations into English, all working from differing approaches to what counts as fidelity to the original poem and to Mallarmé's intentions, most taking Mallarmé's prefatory comments to heart, some also informed by his extended notes from 1897-98. All approximate the layout of the 1914 edition; web-published translations honor the size of the page spreads without, obviously, the gutter found in a bound book. Among those published in the past ten years: Basil Cleveland's A Throw of the Dice Never Will Abolish Chance (2005); E.H. and A.M. Blackmore's A Dice Throw At Any Time Never Will Abolish Chance (2006); A.S. Kline's A Throw of the Dice Will Never Abolish Chance (2007), with a supplemental translation into a single-page, 'compressed and punctuated,' a rendering that helps readers trace the subordinations; and Robin Mackay's A Throw of Dice Will Never Abolish Chance (2012). We might add to this, Chris Edwards's "mistranslation" A Fluke (2005), with its own sense of fidelity driven by parody and other aesthetics of re-presentation. Clearly, there has been a renewed and growing interest in the work.

Bononno and Clark have emphasized the transformative power of their “roll” in the title as opposed to the long standard “throw” of dice, which they mark as more English. “Roll,” however, sets into play a slightly different set of possibilities guiding the translation of the imagination or intellect. Simply put, “roll” invites softer, less aggressive, translations of words, phrases, lines, and spreads.

Among the aesthetic principles informing Bononno and Clark is, in the words of Clark, paying attention to the poem's music; he claims that this is the "first [translation] that is symphonic in its clarity," picking up on a metaphor used by Mallarmé in his preface: "like the symphony compared to the monody." Earlier translations "gave you an idea of what the poem was like but they weren't poems in their own right," says Bononno. Indeed, Bononno and Clark pay acute attention to sound and phrasing, both for their poetic affects as well as to foreground the “clarity” of the poem's metaphor structures. This isn’t to say other translations ignored the poem’s symphonic, structures and thematic patterns. Aldan, for example, invokes the primacy of the symphony in her translator's note: "The four themes, introduced by the title, according to Mallarmé, are equivalent to the four phrase movement of a symphony." Aldan focuses, however, on the multiple thematic variations, their intersections and movement. Bononno and Clark pay extended attention to sound—the symphony as music. For the musical quality of A Roll of the Dice, compare translations of two phrasings taken at random:

Bononno and Clark: and so soothes the virgin sign

Aldan: Falls / the plume / rhythmic suspense of the disaster

Bononno and Clark: Falls / the feather / rhythmic suspense of the sinister

This attention to rhythm and sound extends beyond individual lines to the varied themes and the spread-based layout.

Clark's design of the poem itself faithfully follows the 1914 edition. He emphasizes Mallarmé's interest in the material aspect of book and space by creating a nine-page spread for the title pages, with the type at times exceeding the page, moving off the outer margins or into the gutters. This design further extends Mallarmé's intentions manifested in the poem without violating their fidelity to the layout of the poem itself. Finally, and bringing us full bore into the 21st century, Clark offers in the interstices of the book twelve full spreads of "randomly-lit, burst-mode photographs of black-and-white laserprints."

All in all, it is a pleasure reading a new interpretation of Mallarmé's most influential poem, an interpretation which excites both the imagination and the intellect.

A Throw of the Dice Never Will Abolish Chance (English, trans. Basil Cleveland, 2005, from UbuWeb): http://www.ubu.com/historical/mallarme/un_coup.pdf/

A Fluke (English, a mistranslation by Chris Edwards, 2005, HTML, from Jacket2):
http://jacketmagazine.com/29/fluke00intro.shtml

Adaptations to other media: