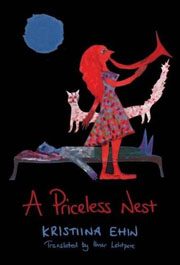 Reading Estonian author Kristiina Ehin’s new collection of short stories, A Priceless Nest, it’s not surprising to learn that she is foremost a poet. The stories are short, but intense, using the compression of poetry to delve into new worlds. In many ways the collection is reminiscent of Aimee Bender’s Girl in the Flammable Skirt, as Ehin creates strange characters and places that in their other-worldliness elicit genuine emotion, although Ehin’s work feels more primeval; the stories read like origin tales. Yet even while using the conceit of folklore, Ehin explores contemporary problems in relationships between men and women, making the collection a hybrid of sorts, both ancient and new in the same breath.

This hybrid element is central to the collection’s title story. The main character, simply called “the woman,” traps and cages in her chest anything that makes her feel and then sells it for silver in a faraway town. This practice has occurred since the “beginning of the mists of time,” putting the character and the town in a place that is mystical yet real, and that predats our modern era—the stuff folklore is made of. The woman is successful in ridding herself of feeling until an adder slithers into her bedroom, coils in her husband’s mouth, and crawls into her when her husband kisses her. The woman puts the man and the adder into her chest and tries to sell them, but no one is buying, so she must live with them inside her, causing her to feel. She eventually adapts to this change, making the feelings part of her, rather than struggling against them: “She hoped and feared, loved and suffered, until she seemed to turn into a log herself—a strong, knobbly sculpture of love, a priceless nest.”

Ehin delves into folklore further by using characters that are neither human nor animal, yet even in these stories she establishes a clear male-female dynamic to discuss common relationship problems. In “Fire and Water,” the title characters are actually fire and water, though Water is a woman and Fire a man—and they’re in love. Lying in each other’s arms, Fire tells Water he thinks it’s most important for a woman to be bashful, which upsets Water because she doesn’t know what bashful means. Ultimately, Fire believes that Water is bashful when he sees his own red reflected in her and mistakes it for blushing, but this further upsets Water, saying, “To be able to love you I have to know who I am . . . If I deceive myself with the thought that there’s red in me, that I can blush, then . . .” Fire responds to Water, telling her that her “natural strength is more interesting than bashfulness,” ending the story with his love for her natural state. The story becomes a parable about acceptance in relationships, a very modern concern rendered strange through a folkloric lens.

Ehin’s use of ancient narrative traditions is, paradoxically, what keeps these stories from falling prey to cliché, making their observations and morals seem new despite the fact that the very same topics are talked to death on any number of talk shows. Ehin adds gravitas to these concerns, making it seem like our contemporary problems are actually rooted in the past.

Having already published five collections of poetry in Estonian, only recently has Ehin’s work become accessible to English speakers with A Priceless Nest and her most recent poetry collection, The Drums of Silence (Oleander, 2007), both translated by Ilmar Lehtpere. Some readers may come to this collection hoping to get insight into Estonian culture, but aside from a few passing references to Tallinn and Tartu (Estonia’s two largest cities) and the story “Festival of Joy,” which touches on the still-felt effects of Soviet occupation, the stories live in a cultureless realm. In this way, Ehin further emphasizes their primeval aspects, and suggests that the struggles addressed therein are universal.