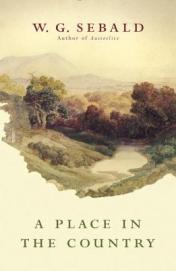 A Place in the Country is the posthumous and inexplicably belated English translation of a series of related essays by W.G. Sebald on influential (from the author’s autobiographical perspective, at any rate) writers and artists such as Johann Peter Hebel, Eduard Mörike, Jan Peter Tripp and Robert Walser. It was first published as a collection in Sebald’s native German in 1998, three years before his death, with the title Logis in einem Landhaus—quite literally, Lodging in a Country House, a phrase it borrows from Walser’s short story, “Kleist in Thun.”

Any review of the book inevitably takes place in the shadow of the elegantly written, insightful introduction by the book’s excellent translator and editor, Jo Catling. In those two roles, Catling has a knowledge of these six essays that is perhaps as intimate and internalized as the author himself, and she begins at the most natural point of entry, by quoting the following passage from “Le promeneur solitaire,” Sebald’s piece on Walser:

Since then I have slowly learned to grasp how everything is connected across space and time, the life of the Prussian writer Kleist with that of a Swiss author who claims to have worked as a clerk in a brewery in Thun, the echo of a pistol shot across the Wannsee with the view from a window of the Herisau asylum, Walser’s long walks with my own travels, dates of birth with dates of death, happiness with misfortune, natural history and the history of our industries, that of Heimat with that of exile.

Readers familiar with Sebald’s sui generis hybridized prose, an inextricable entwining of historical fact and literary fiction (“faction”?) accompanied by enigmatic photographs and delivered in graceful, dreamlike concatenations of clauses that drift between end-of-days fatalism and pastoral reverie, will recognize in this description one of its most memorable qualities. Indeed, it’s hard to approach A Place in the Country without reading much of the commentary as Sebald on Sebald, such as the “detours and digressions of narrative” he identifies in the “linguistic montages” of Walser’s The Robber, or the “objects in which melancholy is crystallized” that he sees in the paintings of Jan Peter Tripp, or his admiration of Gottfried Keller’s “furnishing almost all his stories with a kind of treasure chest (or Schatzkästlein), in which . . . the most improbable relics coexist side by side,” with the latter naturally supplemented by loosely related, uncaptioned black-and-white photos to illustrate the idea.

But there’s more in these half-dozen essays than the reflexive. Sebald is after all a keen observer, and he spots interesting qualities in the work of these kindred creative spirits. He draws a droll comparison between Gogol and Walser as writers, maintaining that “Both of them gradually lost the ability to keep their eye on the center of the plot, losing themselves instead in the almost compulsive contemplation of strangely unreal creations appearing on the periphery of their vision, about whose previous and future fate we never learn even the slightest thing.” The “secret” of these incidental characters, he writes, “(like that of human existence as a whole) resides in their utter superfluity.” He also praises the sociopolitical prescience of a novel like Keller’s Martin Salander and, among other things, the author’s enlightened and sympathetic portrait of Jewish traders in Der Grüne Heinrich, which shows this group demonstrating “the epitome of true tolerance: the tolerance of the oppressed, barely endured minority toward those who control the vagaries of their fate.” That phrasing, incidentally, with its tone of suppressed outrage toward injustice and inhumanity, is another familiar Sebaldian trait that does not go missing altogether in these essays.

Equally satisfying are the broader generalizations distilled into an epigrammatic turn of phrase, like the idea put forward in “J’aurais voulu que ce lac eût été l’Océan—,” the pieces on Jean-Jacques Rousseau, that neither this philosopher “nor those who came after him were ever able to resolve the inherent contradiction between [a] nostalgic utopia and the inexorable march of progress toward the brink of the abyss.” He seems on unusually shaky ground, however, when arguing that art, unlike photography, “depends on polyvalence, resonance, obfuscation, and illumination—in short, the transcending of that which, according to an ineluctable law, has necessarily to be the case.” One would think that Sebald of all people would know that photography—which certainly falls under the umbrella of art—is capable of employing these devices and more to achieve that very end.

It’s worth noting that all versions of A Place in the Country are not equal. The UK version published by Hamish Hamilton is lacking in one important respect, namely, the double-page color images interspersed throughout the text. In an ideal world, these should not be two opposite facing pages but a single folded page with an unbound edge that opens outward, effectively giving the reader a three-page spread (two of a full-sized image, one of text) at a single glance. The American version, overseen by Random House’s David Ebershoff, follows the much more sensible layout of the German original, allowing the reader to imbibe Sebald’s description of, say, Keller’s partially erased Ideal Landscape with Trees while viewing it at the same time.

Formatting discrepancies aside, A Place in the Country is a welcome addition to the near-exhaustive English body of Sebald’s work. The collection offers more than enough to savor, ponder, and revisit until the appearance of Silent Catastrophes, the Anglophone counterpart to the combined essays in Beschreibung des Unglücks and Unheimliche Heimat, rumored to be slated for 2015.