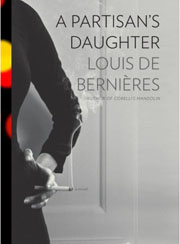 Publishing must be tough for Louis de Bernières—in the same way that releasing a new album must be tough for Alanis Morissette. How would you like to try to follow up on the success of Jagged Little Pill, or in our writer’s case, Corelli’s Mandolin? Works that meet with both dizzying commercial success and nearly universal critical acclaim are rare; they can also break an artist because of the way they unrealistically raise expectations. Fortunately de Bernières has written excellent works both before and since his great Balkan saga of World War II, and A Partisan’s Daughter is another solid, albeit not outstanding, achievement.

This particular book could serve as a useful introduction to de Bernières’s corpus of writings because it underscores his tendency to write black comedy with sunny spots; the author injects only the necessary dose of malevolence and balances it with a formidable erudition. Who could argue with de Bernières’s profound and up-to-date representations of movements such as fascism and nationalism and personalities such as Mussolini and Atatürk in his works over the past decade? It is a rare thing to read big books of fiction packing the emotional punch of Corelli’s Mandolin and Birds Without Wings and to be enthralled and even heartened by the intellectual qualities evident in the historical setting.

A Partisan’s Daughter begins and ends with an old man musing about love. As he nears the end of his life, he speculates, a bit anemically, on the relationships between love, lust, adventure, and obsession. Discovering at the outset that this is yet another treatment of men’s supposed fascination with prostitutes, a reader may be forgiven for having the temptation to drop this work and wait for the next novel from this hard-hitting but quirky author. But the book soon gets better; a writer as ebullient as de Bernières is hard to discount or ignore for very long.

Christian is a representative for a pharmaceutical and medical equipment company in London. It is the turbulent winter of 1978 when the story opens, but the times are not trying for Chris in any political way; rather he is at wits’ end regarding his lifeless marriage and has half-heartedly decided to look for a prostitute one day on the way home from work. He spots an attractive woman, suitably dressed for her supposed trade, standing by the road but “pretending to wait for someone”—and on that note of indeterminacy, we are off to the races in terms of the novel’s intellectual structure, as the woman’s recollections in the next chapter confirm.

The woman’s name is Roza, and from this sinister—or infantile, but lacking the comic thrust that was likely intended—initial encounter, a close relationship sprouts. Chris often drops by Roza’s dilapidated squatters’ building for tea or coffee or wine, and Roza spends most of the book telling him stories about her life. Their friendship is tender, but one cannot help but notice that various clocks are ticking within the story, and the relationship, like Roza’s persona and even her country, is not destined to last.

Roza is from Serbia and she is a Partisan’s daughter, meaning her father took part in World War II on the side of the communist-led Partisans of Josip Broz Tito. After the Nazis were defeated, Tito established a maverick socialist system in Yugoslavia, and her father became a low-ranking official of the secret police—albeit one of a more Stalinist ilk than that of most Partisans or successive generations of communists. Roza’s colorful father looms large in her memories, a Serbian-inflected incarnation of the new order in Yugoslavia. (He is, appropriately, the old order by the 1980s, and one increasingly fragile after Tito’s death in 1980.)

As a girl Roza was steeped in the folklore and earthy village life of her native land, and we learn about her exploratory sexual encounters with her Slovene friend Tasha and her first great love with a Croatian student named Alex. Roza made a successful start to her studies in Zagreb but didn’t finish; she wants to go to England as a tourist and then stay there illegally to work, but in order to make enough money for the trip she must first work in a timber yard in rural Bosnia. She hates it there and eventually leaves Yugoslavia via the Slovenian border to Trieste, where she finagles a spot on the yacht of an Englishman named Francis. The sea journey is fittingly breathtaking in its sex and general adventure. Then, in the English Channel, when it becomes obvious that Roza has no visa for the U.K., Francis grudgingly sneaks her up the Thames. They live together in his village for two years, until Roza gets bored and moves to London by herself.

Roza ends up working at the improbably named Bergonzi’s Pussycat Hostess Paradise Club, where she falls into the prostitution the owner touted as “optional” after she is brutally kidnapped and raped by two clients. She ends up having two abortions and feeling very much adrift in an unreal subterranean life; finally, with her big trunk full of the money thrown her way by men frustrated with their wives and marriages, she calls it quits. Her healing process begins when she becomes housemates with an awkward young actor dubbed The Bob Dylan Upstairs, with whom she shares poetry and (not surprisingly if you know de Bernières’s oeuvre) a heartwarming friendship with a dog. Roza is living off her proceeds, and only sometimes bored, when she gets to know Chris.

For his part, her English visitor enjoys his visits to Roza’s house, platonic as they are. His affection for her grows, accompanied by shock at her stories, but he nonetheless continues to save up money in case he eventually wants to buy her affections. He also enjoys chatting with Roza’s bohemian housemate. Ultimately, these encounters with the domestic and international Other represented by Roza and the BDU change Chris but little; he does, though, note that his childhood seemed bland compared to Roza’s and lament that he knows little about foreign lands. Chris thus takes to reading a lot about the Balkans and eventually travels there several times.

Finally, Chris has saved up the five hundred pounds that he believes was Roza’s asking price. She claims to have something big to tell him at a future meeting, but whatever alliance of the hearts might have been in store for them and us is wrecked when Chris uncharacteristically gets drunk one night and shows up at her door in a rage compounded of self-pity and sexual frustration. He insults her royally; she in turn leaves him a simple note in Serbo-Croatian and moves away, but he continues to think about her for years as his life winds down.

A Partisan’s Daughter is mildly experimental in terms of narration and its use of memory, and after we have figured out the sequencing in the plot, we are confronted with an interesting question pertaining to one of the structural elements: to what extent are the stories of Roza, who functions here as a kind of Scheherazade, actually true? Is it sinister, or at least uncharitable of us, to blame the genius behind a frame-tale, especially when she might be the victim of a kind of cruel human trafficking? But there is a lot of evidence, delivered by the BDU and by Roza herself and gradually unearthed by Chris, that Roza is taking enormous liberties with the truth and pursuing her own agenda in these late-night sessions with the suitor. What that agenda might be, we do not know, but it does remain likely that Roza has a great deal of fear and pain in her past.

On the thematic front, historians such as this reviewer have come to expect great things from this particular author. If de Bernières said lots of things that were spot-on about European and Turkish and Latin American history in earlier works, how well does he manage his facts and demonstrate the modernity of his reading list here? For what it’s worth, the representation of Yugoslavia in this particular book receives only mixed marks. Certain comments on Balkan culture—crowded, convivial bus trips, harsh cigarettes, a widespread obsession with heroism and historical grievances—are dropped in a lapidary, almost loving way into the story. But where political conclusions and, worse, depictions of ethnic conflict are included, both Chris and Roza make plenty of questionable and uncorrected generalizations. Albanians and Bosnians are not the same people, despite the fact that many are Muslim and that some Serbs call them all “Turks,” and the demise of Yugoslavia did not get underway in the late 1980s with Albanians killing Serbs. One has to trust that the author, like his characters, probably does believe, when push comes to shove, that hate can only be justified when a broad sample of behavior is observed and logged.

Ultimately, this book is not really an interrogation of the art of storytelling or a commentary on Balkan history; it is a meditation on the difficulty of saying anything coherent or original about love. The men in the book think of marriage as a desert, of wives as loaves of pasty sandwich bread, and of other women as bodies with holes; these men are pretty much all ignorant, misogynistic, or frustrated. There is no serious consideration of why the marriages actually fail or any balanced presentation of how the various women really think. The title character, the charming and intelligent Roza, could possibly make a difference to one man and succeed in her own quest for happiness, but the drunken confrontation at the end of the book is not the real cause of the bleak breakdown. An unavoidable litany of current events leads us past Tito’s death and up to the breakup of Yugoslavia and the end of all cultural points of reference for a Partisan’s daughter; we also witness the slow accumulation of money in Chris’s sex fund that parallels Roza’s stash in the trunk under her bed and augurs a radical change of lifestyle. It would seem, then, that the scarred emotional landscape of marriage and sex is international and, alas, incapable of repair. De Bernières shows us that love, lust, and obsession are all real but not necessarily fruitful.