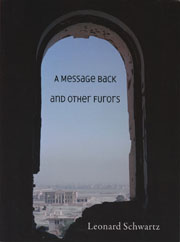 Leonard Schwartz’s A Message Back and Other Furors is a furious study of language and form. This book is divided into two sections: a 60-page serial title poem and a 7-page prose coda, titled “Coda (Red Fog).” The first poem begins: “Familiar ground is a foreign land,” a line that serves as the first line for several poems. Throughout, Schwartz draws our attention to the familiar and the foreign; what’s more, he sketches the various perceptual experiences of defamiliarization and deforeignization.

Formally, the poems alternate (recto/verso) between long and short lyrics, as follows:

Familiar land is a foreign ground.
Zero built its nest in These States.
Some people naked, others partly clothed.
How many gods people the thundering hall?
Words are animals that want to run away,
deer startled at the sight of mental agitation.
And being each and all unfurnished
when the grass and flowers are all gone
Americans awake in the artificial light of a large hall.
Our preference: not to observe that we are used like things.
Such obedience to cause and effect, action and sound.
Everything in this world is made to fit.
Everyone in the world works to make it fit.
It is fitting that everyone in the world should so work.
In winter I experience autumn’s losses.
Spring fosters an awareness of that loss.
In summer, just summer, just this once.

Schwartz has the remarkable ability to integrate lyricism and politics, image and abstraction, and he uses the major compositional mode of A Message Back, repetition and rearrangement, to excellent effect. Across poems, lines and phrases repeat themselves in surprising variations:

Familiar land is a foreign ground.
Some nudes escape, other partly clothe.
Animals the words that decide to run away forever.
Being each and all furnished with waves we don’t need
we Americans awake in the morning to high tide.
Such obedience to cause and effect, action and sound.
Everyone in the world works to make it fit,
after all zero built its nest in these States.
How many natures people the thundering howl?

Alongside this serious strain is a more colloquial and humorous texture. Phrases like “smart aleck” and “Star-69” pepper the work as Schwartz’s voice moves from meditative to agitated. We gain a sense of the impending madness about midway through the book, when we read:

Your attention please:
train #117, The Signifier,

Limpid, and Translator-Of-Desire,
is now boarding.

All ticketed passengers are invited to assemble
at the gate marked “Broken Mirror”.

Tying into Schwartz’s “other furors” is his humor. Rarely does a poetry collection make one laugh out loud, but these lines are irresistible: “I think, therefore I have an office”; “(I plan to invest in a line of houseboats / without any floors—driftwood really); “You want to have your Odysseus / And Ulysses it too.”

In the coda to the book, Schwartz states: “You believe in perceptions, in forms, in bodies, in perceptions of forms and bodies, but these are all maps, the perceptions, the bodies, the forms. You choose to look at them—the bodies and the forms—but there are no maps onto which to place what you see, no charts with which to freeze what you feel, no maps or charts to deploy in order to traverse or conquer this field.” With this in mind, we are able to read A Message Back and Other Furors in all its perceptual and formal terrains and let go of any desire to place or freeze or conquer the field. What remains is poetry and its “ceremonies of deep listening.”