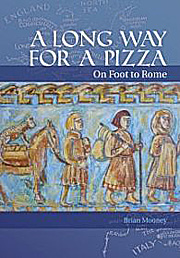 During the summer of 2010, retired Reuters correspondent Brian Mooney stepped out the front door of his home in Essex, rucksack on his back, and set off for Rome—on foot. This 1,400-mile journey took him seventy-five days. The title of his retelling of the experience, A Long Way for a Pizza, may seem like a humorous, self-depreciatory label masking a profound and dramatic experience, but in fact it’s perfectly apt. At no point along the way does Mooney come up with a compelling reason why he made the journey—though he ponders that question repeatedly along the way.

Long walks have become a staple of travel literature in recent years. Some are journeys of self-discovery, such as neophyte walker Cheryl Strayed’s Wild. Others, such as Jack Hitt’s Off the Road, draw much of their interest from characters met along the way. Yet a third approach is exemplified by W.S. Sebald’s rambling and evocative The Rings of Saturn, in which the solitary walker explores the history of the various landscapes and historical sites he passes at such great length that we’re sometimes startled to be reminded that we’re on a walk at all.

Mooney’s book offers none of these virtues. He prides himself on being an experienced long-distance walker who lets nothing stand in the way of putting the requisite number of kilometers behind him, day in and day out. At one point he remarks that “long-distance walking does not combine well with leisurely tourism” At another he observes that conversation with other “pilgrims” is likely to throw one off the track.

Mooney meets up with precious few hikers during his trek in any case, which may be a fact worth pondering. Unlike the Santiago Trail, which stretches across largely-rural northern Spain and draws thousands yearly, Mooney’s chosen route, the Via Francigena, transverses vast tracts of land peppered with suburban and industrial real estate, highways, and high-speed rail lines. Thank God for the canals and deserted country roads! No wonder he sees so few pilgrims and loses his way almost daily.

From the very beginning, Mooney treats us to observations about the buildings and towns he’s passing and the landscapes he’s moving through, but they’re delivered in the clipped, matter-of-fact style of a seasoned news correspondent, with nary a wisp of romance or atmosphere involved. At each stage on the journey, the details that might interest us are crowded out by mileage reports, complaints about signage, judgments about the quality of the four-star hotels at which he stays—and the nationality of the masseuses who tend to the numerous physical ailments he develops. Though Mooney himself seems to be an agreeable chap, his entire narrative seems rushed. That may be a good way to walk, but it isn’t an interesting way to share the tale.

A case in point: Mooney has arranged by mobile phone to be ferried across the River Po. He writes, “Reaching the little riverside jetty about thirty minutes before Danilo had arranged to pick me up, I had time to visit the farming hamlet of Corte San Andrea before returning to the white sandy shore . . .” But he doesn’t describe the hamlet or explain why he went there. Nor does he describe the River Po in any great detail. Is it a half-mile across, or fifty yards? Are there boats moving up and down the river, or is it a desert of reeds and swamps? Mooney would have written a better book (and probably had a better hike) if he’d sat on the shore for that half hour, soaking in the countryside, and then shared a few details of that experience with us.

Those who stick with the narrative will notice that the book gets more interesting when Mooney finally reaches the Alps, and it becomes more engaging still when he drops down through the Val D’Aosta into Italy. Yet while he says “walking to Rome was to become a magical, almost mystical experience,” the promise of this remark is never fulfilled. We reach the end of the narrative with the firm conviction that the reason Mooney walks is not to “hold back time” and to “understand how small we really are,” as he himself attests, but to avoid reflecting on who he really is by methodically placing one foot in front of the other.