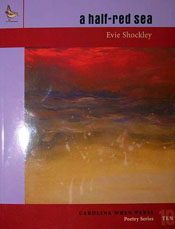 In a half-red sea, Evie Shockley’s first full-length collection of poetry, the poet presents public and private histories through a series of narratives, lyrical monologues, fantastic episodes, and imagined dialogues. These stories are enlivened and complicated by the poet’s careful attention to form and by her imaginative use of both free verse and received poetic structures. United by a voice that is both sure and supple, the poems here consider individual and collective American histories through a complex of lenses; matters of sex, race, culture, nationalism, and power are turned in the poet’s hands, revealing smooth planes and sharp edges. The result of Shockley’s attentiveness to language and to a complicated cultural and emotional record is a moving and surprising book that is “prickly with bloodless truths.”

Throughout a half-red sea, one is struck continually by Shockley’s remarkable formal flexibility; she leads readers as confidently through sonnets and other rhymed verse as through spatial forms and dynamic poetic structures of her own design. These invented forms are the most compelling, however. “A Thousand Words,” for instance, unfolds (literally as well as poetically—the poem is printed on a fold-out sheet, breaking beyond the bounds of the book) in a rush of word and sound associations and metaphor-making juxtapositions, all within a “frame” of torture (the word repeats as a literal frame): “torture flood flow leak drip drip drip Chinese water torture lose my mind’s eye visualize sexualize lights camera torture.” “A Thousand Words,” is fascinating and painful, fraught with an angry grief.

Shockley’s straightforward and confident voice facilitates her movements in and through time; the poet layers the past, or rather pasts, atop present moments and modes of expression, reminding us that then and now are neither separate nor distinct. And Shockley populates a half-red sea with a range of real and fictional people, including many historical figures; we encounter Phillis Wheatley, the title character of Ralph Ellison’s Invisible Man, the Temptations, Miles Davis, and Anita Hill, to name but a few. In lines that move with a determined grace—sometimes witty, sometimes sharp and doubled-edged, sometimes tender—the poet brings these varied characters into a lyric present tense. In “wheatley and hemmings have drinks in the hall of ancestors,” (“those two’ve been / doing drinks since mark twain / was in diapers”) Sally Hemmings speaks “as though // the living hear her.” The speaker of “the ballad of bertie county” describes her experience visiting a home where blacks were once enslaved: “how many, how many // slaved here? echoes of injuries rushing down / the spiral staircase at us, seeping from the wood / floor like sweat.” In “henry bibb considers love and livery,” the poet layers her own fractured text with lines from Narrative of the Life and Adventures of Henry Bibb, An American Slave, Written By Himself (Shockley’s text is italicized):

The poet’s preoccupation with history and her deft experimentation with strict and loose poetic forms give the reader of a half-red sea a feeling of discovery; we are witness to the poet’s process of articulation, her unearthing of new ways to tell the conflicting truths and stories that make up her American history. Shockley is, she tells us, “trying and trying not to disregard / what we’ve inherited.” With this remarkable debut, the poet reveals America’s dark past in its complex and difficult present. “We bore our mutual loss // in anything but silence,” Shockley writes in “the ballad of bertie county;” “we swore to log this passage, to account / for this double-crossing, to etch an inerasable trace.”