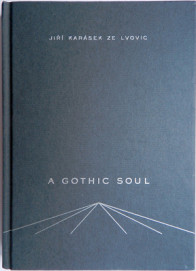 First published in 1900 and hailed as a fundamental work of Czech Decadence, Jiří Karásek ze Lvovic’s A Gothic Soul is an essential volume of anxiety-riddled philosophy—one to shelve prominently alongside comparable masterworks like Dostoevsky’s Notes From Underground and Camus’s The Stranger. Steeped in suffering, the narrator of A Gothic Soul calls himself the “last scion of a venerable chivalric family” and drifts between melancholic feelings of nihilism, faithlessness (in both God and society), and anti-nationalism. Devastatingly, the narrator makes continuous attempts to fill these newly discovered voids within him: he discounts God but hopes to discover a creed with which he can connect; he disconnects himself from society only to project the potential of friendship and love upon strangers he sees. Throughout A Gothic Soul, “life clamors around him but brings him neither joy nor torment:” the narrator seeks a way to connect his soul to the world, unaware that his mantle of gloom may be exactly what’s keeping him from enlightenment. As Karásek explains in his forward, “fear of himself . . . is what pushes the hero to escape from himself, to flee from himself, that is what spurs him on and shatters his piece of mind, and the impossibility of escaping himself is what destroys him.”

“This psychological problem,” continues Karásek, “replaces the plot and storyline found in other novels.” This is a surprisingly succinct explanation for such complicated prose. A Gothic Soul expands in a fever dream of abstract ideas: in one moment, the narrator bemoans his incongruence with God, and pages later he’s erected an empty church, in his mind, and lurks among the gilded icons. But inevitably, he denounces the place: “you have preached mortification and asceticism,” he tells the church. “You have terrified the world with the gaunt faces of martyrs, instead of delighting it with a smile.” He tries to find solace in these new hypothetical environs, but, like all the narrator’s flights of whimsy, his dreams of “a distant metropolis” crumble in as inquisitive and delirious a haze as they were built.

A Gothic Soul wrestles with emotion and hopelessness in a way that maintains a remarkable relevance more than a hundred years after its original publication. Early-twentieth-century malaise is a well-worn theme in European literature of that era, but Karásek transcends his contemporaries by creating a mind in desperate need of waking up from that sorrow; in so doing he finds a harrowing emotional resonance in his narrator’s depression, one that powerfully reflects today’s darkly mantled society. “In addition to this life,” Karásek’s narrator “led another, which he carefully concealed from everyone. It was a life of doubts and fantastic phantoms.” Of course, this “second life” is problematic, but Karásek writes of it in a way that understands the need to withdraw, and by doing so shows like-minded readers that they’re not alone:

Sometimes he would be overwhelmed by such melancholy that he would weep in secret without even knowing why. Then he would give himself over again to extraordinary hopes. It was as though everything in the world had an alluring magic for him. He knew that at some point a life of beautiful dreams and beautiful reality would begin, a golden, exquisite life like a work of art, a proud jewel, covered with precious stones.

Despite the narrator’s restlessness and the “impossibility of escaping himself,” there’s hope among those fantastic phantoms. If withdrawing into that second life reveals the “alluring magic” of what the world could become, perhaps that recession is a necessary step towards personal clarity.