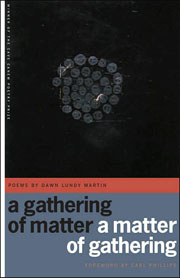 a gathering of matter a matter of gathering, the debut collection from 2006 Cave Canem winner Dawn Lundy Martin, is an artful scar winding over broken bonds of trust—trust in father and family, trust in men and mankind. Starting from the recesses of memory marred by abuse, Martin’s speaker dredges a harrowing past and stages it as an ongoing condition of living in the present. Martin attempts to rid her speaker of a painful history while reformulating it via damnation of the perpetrator, a world permitting perpetrators, and even the child abused. At times confessional, and persistently lyrical, percussive, and thrumming, a gathering of matter shatters the at-large world of bodies while endeavoring to reconcile her speaker’s memories and present body.

The broken bones of these two objectives must knit if the collection is to succeed, and titles like “I/M/A/G/E” and “Completion Cleaved” (subsections of “Negrotizing in Five; or, How to Write a Black Poem”) gesture toward that end. At first look Martin does succeed. The collection is arguably a long poem of enraged bereavement, which in itself is no straightforward thing. Being an amalgamation of contradictory emotions—some that tear and some that bind—bereavement is both a process and result that the plenary person has literally survived.

But as readers, we are obligated to ask if the threshold verging the aforementioned struggle toward unity is believably crossed—we must ask if a chronicle of bereavement is sufficient for poetry. Closer scrutiny reveals a gathering of matter remains raggedly sundered, so much that it blurs the line between therapy and art. The poems’ timbre is at times too invested in its fever, and the poems are often too spinningly linguistic for the sake of the emotional matter. Furthermore, the collection suffers from a hasty conclusion—the reader is asked to believe conciliation between the book’s present speaker and past speaker has occurred.

The first poem, “Last Days,” surveys from a cold vantage the damage done a daughter by a father’s sexual abuse:

What is the relation between Figure A and Figure B?

That is what the father has become.

Who breathes in the room?

A girl on the bed, a daughter.

They won’t deliver him to her, her palms, little petals.

There are A and B, and some curtains drawn tight to lock the room.
There is the scent that I will remember for many years.

This is what happens before the figure disappears?

A row of unkempt stones they call heroes.

How is the pain endured?

A stem of grass imagined when it is not raining.
All those things called intentions. The private treasures one keeps safe.

From this point forward the speaker’s memories darkly coalesce. Out of this darkness sometimes spills a storming rage that buffets the bounds of diction, as in “Bone”:

Toward him. When sleep comes, it comes bare. Barely.
To balance there. It has been twenty years.
“What do you think about when you think about him?” Only,
toward him. Brush of him. Breath brush. Rum.
It was my first drink. Hairless arms and legs. Breath
of drink. Breath. Barely breast.

The collection is constructed from poems more resembling the latter than the former, in which we may hear Nathaniel Mackey as an influence. “Direct at blood-beat angled as to cease it,” from Martin’s “Sunday Lessons,” purely picks up the sparkling tones and textures Mackey perfected in Splay Anthem’s “Song of the Andoumboulou: 50,” for example. Consider this segment: “emollient feel for what / might not have been there. Head in the / clouds he'd have said of himself, / she'd / have said elsewhere, his to be above and / below, not know or say, hers to be / alibi, elegy otherwise known . . .” The matter of this Mackey passage is undoubtedly softer than Martin’s, and the lyric is less compressed or prone to slippage. Martin tends to extend or heighten the musicality with a plosive consonance that is jarring and metallic—as in “Breath / of drink. Breath. Barely breast.” Despite the differences, however, one notices the debt.

One might also make the oblique connection of Martin to Harryette Mullen, especially in consideration of the passage above from “Last Days.” The chance encounter with cooler language in that poem—and chance encounters with cooler language in a matter of gathering overall—makes it easy to link Martin to contemporaries who play languorously, as Mullen does. The slowness of “Last Days” might seem to link well with Mullen’s “Any Lit” or “Sleeping with the Dictionary.” But I believe Martin channels deeper currents in her slower movements: more surprising than Harryette Mullen, we may, as we turn from a Mackey moment, chance upon something in the mood of Virginia Woolf. From Martin’s “I/M/A/G/E”: “I / want to tell you about the splitting of a female body—how I squeezed into / it—fitting barely, of the texture of melancholy, of a sycophantic love, draw / a flicker for you, let you enter as if entering me.”

This is of course a leap, but what is interesting in this potential connection is how Woolf, in On Being Ill, describes a process of pain. She notes the body impinges in building measure upon the mind and is capable of driving one quite mad. A damaged body impedes the spirit’s search for the Essential:

All day, all night the body intervenes; blunts or sharpens, colours or discolours . . . The creature within can only gaze through the pane—smudged or rosy; it cannot separate off from the body like the sheath of a knife . . . until there comes the inevitable catastrophe; the body smashes itself to smithereens, and the soul (it is said) escapes.

Further complicating the matter, Woolf believes, is one’s inability to give voice to this process:

[L]et a sufferer try to describe a pain in his head to a doctor and language at once runs dry. . . . He is forced to coin words himself, and, taking his pain in one hand, and a lump of pure sound in the other (as perhaps the people of Babel did in the beginning), so to crush them together that a brand new word in the end drops out.

This description of a body impinging on the soul is of course apt for Martin’s narrator, whose scars are as fresh as sutures—they are integral to the frame and have become indistinguishable from it. Returning to “Bone”: when the subject of the father arises, the narrator admits to thinking of him “only”—despite the intervening years, the father looms (“It has been twenty years.”). In this instance the speaker is no longer a single self, and is broken over grief. Despite intervening years in which she could have muted her anger, she has frayed into a composite of herself now and herself as she believes she was in youth, with the abuser standing beside. Martin’s speaker breaks the past into so many pieces—the painful and pleasant memories, etc.—that the result is an irreconcilable dust which, come the concluding poems like “Instructions” and “Fire Island,” whisks off into some undisclosed vista, un-re-attainable, unresolved. “Instructions” gestures toward a fairy-tale motif: “Imagine her surrounded by toads and a pen.” Also mentioned: “A tea towel folded into halves,” which we might assume lies in someone’s lap, and which presents the idea of family and condolence after, perhaps, the great violence of the preceding poems. Following “Instructions” is “Fire Island,” which tries to drown the collection’s burden in the sea: “She unremembered here. A pounding, sucking force— / think about the water’s white rim.” Also from that poem: “plunging / colorless against expanse, devoid of scent, devoid of air. She is full.” But these conciliatory poems are circumvented by “Bleeding, an Autobiographical Tale,” which details “the stinked history of other inappropriate drills—being a girl.” The work to achieve solace in “Instructions” and “Fire Island” is erased; the balance is tipped against artfulness.

Paul Celan, upon receiving the Bremen Prize, took a moment to enumerate what remained in the midst of the loss he experienced:

. . . language. In spite of everything, it remained secure against loss. But it had to go through its own lack of answers, through terrifying silence, through the thousand darknesses of murderous speech. It went through. It gave me words for what was happening, but went through it. Went through and could resurface, “enriched” by it all.

Martin does not retreat with a bare language to a sanctified core, nor does her experience “go through its own lack of answers” (my italics), as it does not achieve an other-side as of yet. Indeed, she invokes a “ murderous” speech, but we still await “words for what was happening.” a gathering of matter chronicles its speaker’s ravages, but its conclusion does not provide a core or new language from which we may progress.

Perhaps in later collections Martin will refine her considerable energy and build the converse of this ravaged past. She certainly matches, sometimes even bests, our contemporary greats in lyricism and shift of wit, and has an undeniable talent for concretizing physical manifestations of the macabre. Deeper still, she has a love of place and history that, given full room, will provide good root for a future beyond grieving. And fairly, there are few satisfying answers to the questions abuse and grief asks; to frame a new language from a private carnage is a daunting task. a gathering of matter a matter of gathering does not raise new landscapes from the charred pain at its core, but it heralds a talented and terrifying voice, and this is bounty enough for now.