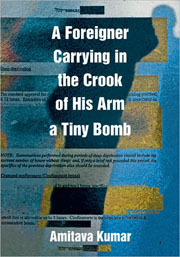 The title of this book is derived from A Foreigner Carrying in the Crook of His Arm a Tiny Book, a book of poetry by Edmond Jabes—the prolific Egyptian-Jewish writer who was exiled from Cairo to Paris during the period of tense Arab-nationalism in the 1950s. Some aspect of Jabes’s predicament, in ways that are not completely clear, continues to affect Indian author Amitava Kumar. A little less cloudy is the influence of Jabes’s staccato eclectic prose on Kumar’s style, which readily sacrifices coherence, focus, and linearity in its often admirable attempts to jolt the reader with a more explosive and lasting impression.

Over several books during the past decade, Kumar has brought this style to bear on his long-lived preoccupation—one virtually bordering on an activist’s crusade—of measuring India and the United States (the two societies he knows best) by his own stringent standards of secular humanism. These standards are suggested by his personal condition as a Hindu Indian married to a Pakistani Muslim and by his deep absorption with all flavors of prejudice—racial, religious, cultural, national, and ethnic.

The results of these projects have been mixed. In Passport Photos (University of California Press, 2000), the impression left is of a collection of snippets from several NPR shows put together into a well-meaning but incoherent volume of images and platitudes: it was a difficult book to read in spite of the writer’s politics and concerns.

In a later book, Husband of a Fanatic (The New Press, 2005), Kumar explored, among other things, how insular and parochial Hindu communities in the United States were financing a bloodthirsty fundamentalism in India. The violence of the Hindu Fundamentalists in India during these years, especially in the state of Gujarat, gave this book a sharper focus. And who better told us what anti-Muslim hatreds simmer with the jilebis and pakodas in those colorful Indian lanes all around North America?

The meandering narrative of A Foreigner Carrying in the Crook of His Arm a Tiny Bomb tries to stay focused on the criminal trials and personal histories of two men convicted of “aiding and abetting” terrorists. One of them is Hemant Lakhani, a Indian-British “businessman” arrested in Newark in a FBI sting in which he had accepted large sums of money to supply a terrorist network with Stinger missiles. In actuality, Lakhani had no missiles, and no plan: he just wanted the money. Lakhani, however, appears a genius next to Kumar’s second study, Shahawar Matin Siraj—a twenty-four year-old Pakistani immigrant living in Queens who participated in plans to bomb Herald Square in mid-Manhattan. If stupidity were a defense, these men would not have been charged. But they were, and they are now serving long prison terms for, as Kumar puts it, having “trouble distinguishing between the world and the womb.”

Much of the success of this book comes from the honing of this mercurial style and voice; gaining authority over these many books, this voice is now recognizable as Kumar’s own. And here, the meandering—through almost every aspect of the domestic “war on terror,” and to moribund destinations ranging from Srinagar (the capital of battered and besieged Kashmir) to the federal penitentiary in Springfield, Missouri—is wonderful and thought provoking.

If there is an element that weakens the narrative and takes away from its passionate seriousness, it is exemplified in a standalone two-page section toward the end of this small book. After he has returned from Srinagar, Kumar offers some meditative thoughts on Nobel prize-winning writer Orhan Pamuk’s memoirs Istanbul, a book he is teaching in a class “on writing about cities” at Vassar College. The image of Liberal Arts students on a pristine campus being taught from the latest literary bestseller introduces a mildly discouraging whiff of fraudulence, even as one prepares for a thought-provoking interlude. Considering “the melancholy [Istanbul’s] inhabitants have embraced as their common fate”—melancholy conveyed to Pamuk by their “pale, drab, shadowy clothes”—leads to a commentary on the provocative use of color in Jashn-e Azadi (How We Celebrate Freedom), a contemporary documentary film on the Indian military’s atrocities in Kashmir. From here we are taken to V. S. Naipaul’s forty-five-year-old travelogue, An Area of Darkness; from there to Director Hany Abu-Assad’s Paradise Now, a movie about a suicide bomber in the West Bank town of Nablus. The conclusion of the suicide bomber’s farewell message (“A life without dignity is worthless. Especially when it reminds you day after day of humiliation and weakness. And the world watches, cowardly and indifferent”) brings order quite powerfully, having described an axis (to borrow Kumar’s riff) from a Book to a Bomb.

This is the kind of sophisticated synthesis that only a talented writer immersed in the many facets of his subject can pull off. But even admirers of such craft, and admirers of Kumar’s depths of compassion, would wish that these skillful interludes could be detached from the background that is the cultural life of the Liberal Arts college. The classes and book readings, the “protest art" shows, the fringe movie screenings, the campus lectures and visitors—they are everywhere in this book. The culture of the idyllic and manicured college campus is sometimes too jarringly dissonant from the places—Nablus, Srinagar, the federal penitentiaries—where Kumar takes us.

Kumar saves his most soulful and chilling thoughts for the last chapter of this stirring guide to the domestic “war on terror.” The new regime of FBI wiretaps and informants leading to the entrapment of a crooked Indian businessman and of an illiterate Muslim immigrant, are, in the final reckoning, indeed very small things. In his final reminder, framed around a particularly heinous episode of “collateral damage” in Iraq, Kumar points out that the “the war on terror” and all of its often dubious paraphernalia of arrests, charges, rhetorical and factual exaggerations, judicial tomfoolery and FBI stings, Fox News style headlines, tests to the limits of civil liberties, and bombast leveled upon jittery societies everywhere—all of it serves one purpose more than any other: it hides “from our view the brutality of the state and the horror of war.” All of it is “an elaborate and expensive distraction that hides from us the real crime.”