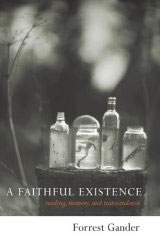 Forrest Gander’s book of essays A Faithful Existence complements the author’s poetry handsomely, opening the heuristic properties of Gander’s work into another genre. Yet “essay” in the normal sense of the word is perhaps an inappropriate word for what occurs in these writings; I prefer “assay,” which “tries or puts to the test” and holds connotations of deep research, a “mining” that is altogether apropos for this poet who has a background in geology. The subtitle of the book frames its exploration provocatively, implying that, for Gander, a faithful existence has something of a religious dimension. However, in a series of appreciations, close readings, and meditations on translation and poetics, the author shapes his discussion to make manifest that he understands poetry-making as intrinsically processual, a practice that “rouses a consciousness that is not sufficiently awake.” Thus, the spirit that inheres in this work is not one that would fit into traditional religious categories, but one that measures transcendence as “a beyond of being” (Gander’s citation of Levinas) that is simultaneously fully embodied and keenly tuned to presences that bear up to no rational account.

It is no coincidence that the title of one of Gander’s poetry collections, Torn Awake, recurs at least twice in this book as a terminology he applies to poetics and to life itself. Gander shows the practice of poetry as an urgently ethical struggle. Through writing–or translation–the author is able to attend to otherness in a way that permits perception to stretch consciousness and create relationality. For instance, in “The Strange Case of Thomas Traherne,” the reader is introduced to the work of a 16th-century British poet whose extant writings were rescued from a rubbish fire in 1967. Gander excavates Traherne’s “COMMENTARIES of heaven” arguing compellingly that their visionary imagination “anticipates contemporary phenomenological urgencies.” Employing the philosophies of Emmanuel Levinas and Maurice Merleau-Ponty, Gander shows that Traherne foresees that “absence and negation presuppose presence and signification” and shows how this in turn leads to an enriched intersubjectivity (“a profound, extensive interpenetration of all beings and things”) that results from a “breakdown in the distinction between subjectivity and world.”

Similarly, Gander agilely reads the work of George Oppen, showing how Oppen both adopted and adapted ideas he had picked up from Heidegger and, likely, Merleau-Ponty. After pointing out the striking consonance between the language of Merleau-Ponty and Oppen, Gander claims that “in sloughing presumptions that circumscribe our thinking, both writers suggest we might step from the ruts of a conditioned perception into the clarity that each prizes.” The struggle is to keep oneself grounded in material experience, in the revelations of perception, and yet to maintain a sense of wonder: “a consciousness that is nothing if not a collaboration with the world.” Clearly, Gander appreciates the phenomenological agency of Traherne’s and Oppen’s work because it is so relates to his own understanding and practice. In essay after essay, the reader sees him striving for an “epistemological nakedness” that will refresh his relationship with language and the world.

I was repeatedly reminded of the French philosopher and mystic, Simone Weil, who insisted that attentiveness has the power of the miraculous; to truly attend to a task or project can be transformative, a means through which the “self” becomes a conduit for a larger agency and consciousness.

There is, in Gander’s sensibility, a willingness to surrender, to be “cored out” in potentially ecstatic ways. In a series of pieces on and about translation, Gander compares language-in-transit (i.e., translation) with “the migration of souls into bodies over time.” If this is transcendence, then it is, equally, a slippery process, for there is no single celestial destination; rather the texts make “manifold journeys toward meaning.” Wary of the English-speaking translator’s propensity for making “colonial raids into other languages,” Gander emphasizes that the translator must try to disappear into translation so that the whole work—not merely individual words—is translated. Thus the text becomes more than a static entity, but a journey in its own right.

That this journey should lead the reader/writer “away from a world familiar by consensus” is another way in which we are awakened, and our revitalized senses are brought to bear on oddities of experience and perception. When I first read the book, I was particularly struck by aspects of its design. Notably, many of the essays are accompanied by photographs: of a nymph stick insect, of two boys fishing in Henry Dumas’s hometown, of a drawing of the fictive Araki Yasusada, of the writers Jaime Saenz and Robert Creeley . . . These photographs de-center the traditional essay’s focus on text and add dimension to Gander’s subjects. The image of Saenz, for example, ensconced in the gothic darkness of his apartment, his somber face echoed in a portrait that hangs just above him, make that poet a more tangible spirit. Further, Gander’s writing “about” Saenz is tantalizingly oblique since he interweaves morsels of biographical material into an account of his own trip to La Paz, Bolivia (where Saenz lived). The details that portray the visit to La Paz are variously mysterious, odd, and funny; their very sharpness brings Gander and Saenz into a living relationship. Likewise, Gander’s sensitive appreciations of Agha Shahid Ali and Robert Creeley movingly animate the two poets, their lives, and their work.

A Faithful Existence conjures a lush, almost erotic attentiveness to language into which all of us who are the co-inhabitants of language are invited. These writings are moving because Gander is passionately engaged with his subjects. Few writers of his formal range and intelligence so openly address the role of emotion in art-making. Gander doesn’t merely open the subject, he plunges in viscerally, making emotional experience a central part of his perceptual repertoire. In the interaction between two of Gander’s assertions—"relationship is consciousness itself” and “emotion [is] the ability to perceive”—arises a poetics of consummate empathy. The emotional and intellectual suppleness of these writings models a vulnerability that, in the end, is the best possible exemplar for faithful existence.