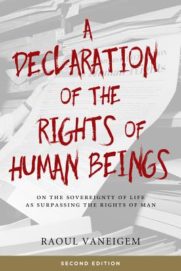 In this second edition of A Declaration of the Rights of Human Beings, Raoul Vaneigem expands upon the first edition published seventeen years ago. Best known for his 1967 work The Revolution of Everyday Life, the Belgian author was a member of the Situationist International, and decried what he called passive nihilism, “a world rife with the most atrocious acts of cruelty committed on the greatest range of grounds—religious, ideological, legal, illegal, individual, collective.” His slogans were painted on walls in Paris during the 1968 uprisings.

Not an easy read, Vaneigem’s declaration—which has been updated to include virtual exploitation and the misuse of technology, among other things—is divided into 58 articles, each detailing an essential human right. With essential freedoms under threat in so many parts of the world, this book provides guidance and a framework for basic protections.

Vaneigem contends that free market freedoms usually negate human freedoms, and that “There Are No Rights Already Won, Only Rights Yet to Be Won.” While some might say that constitutional rights already exist in some nations, the author would take it much further; he posits that basic necessities should be produced using renewable, non-polluting resources, and should be free. Until such a system becomes feasible, he believes everyone should be given a “living allowance.”

“All human beings have the right to knowledge,” states Article 4. Of all his premises, this is perhaps the most attainable in the United States and Europe, where public schools (and, in some nations, universities) are free. This was not a given prior to the 20th century, and is not a reality in many nations. Vaneigem believes that no form of education should require any payment.

Few would argue with the author that “All human beings have the right to life.”
However, Vaneigem dodges potential problems when he discusses “the control and regulation of human and animal births.” He imagines a global project which would make the need for such controls obsolete, but fails to propose a specific solution to population growth or to recognize the need for reproductive freedoms. Nonetheless, the basic principal is sound and integral to any social contract.

Article 5 states that “All human beings have the right to happiness.” The U.S. Declaration of Independence suggests the same thing, but the problem is legislating happiness. Still, by enshrining human happiness as a principal and guaranteeing human needs and liberties, governments could go a long way towards eliminating misery.

Vaneigem’s declaration is lengthy, spiritual in places, and some might say impractical—though the same was said of works by Locke, Rousseau, and Marx. At a time when economic disparity is widening, when xenophobia, nationalism, and intolerance are growing worldwide, we need idealists. A Declaration of the Rights of Human Beings provides the inspiration for human freedoms that should and can be part of every nation’s constitution and of international law.