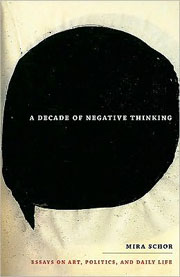 Mira Schor’s introduction to A Decade of Negative Thinking frames her perspective nicely. Living blocks from Ground Zero in Manhattan, a cloud of negativity hanging dustily over this past decade, she admits to the reader that she looks for the sub-par in art, primarily because she believes the art industry won’t admit to the real drudgery of swimming through all the bad art out there. At her best, Schor is able to read against the grain, providing an opposing analysis to the dominant consensus of what is important and what has become influential in art. She seeks and brings out the minor, the overlooked, the modest, and the in-between.

The book’s weaknesses are due mostly to Schor’s complaining tone about the disregard for painting in the art world. This is not necessarily a bad thing—painting can use a defender at a time when literally anything can be used in an artwork—but painting can no longer reign like it once did. In contrast to Schor, Roberta Smith, who has written some scathing art reviews for The New York Times, has a more inclusive and pluralistic view of art and a spirit of openness and hospitality to all art media. Where Schor can see only a regurgitation of “trite tropes” and an influx of too many bad artists making “recipe art,” Smith has recently opined that there is “the distinct possibility that quantity and quality may not be so mutually exclusive. More means more better.” 1

Schor’s resistance to change in media colors her writing to suggest a resistance to all change, an odd trait for a feminist. She has long said that women can make meaningful marks in painting, most notably in her 1997 book Wet: On Painting, Feminism and Art Culture. This new book, however, lacks the theoretical depth of Wet. The chapters here are short, referencing panel discussions, blogs, letters, and amateur art, leaving little room for in-depth analysis. Furthermore, Schor’s prose lacks charm—she fails to tell the kinds of stories that would bring the viewer around to her perspective. Instead she creates list after list of artists making crappy art, which feels strange to read because it merely describes what to avoid rather than illuminating the good and influential.

In the first section of the book, aptly titled “She Said, She Said: Feminist Debates, 1971-2009,” Schor lambasts young women artists who refuse to pronounce themselves as feminist. It is rooted in a personal account of her traumatic, life-altering experiences at the Feminist Art Program at Cal Arts from 1971-1972, led by Judy Chicago and Miriam Shapiro, and even concludes with her personal letters to friends and teachers from her time at Cal Arts. In a brief introduction to the abridged letters of her younger self, she admits there might be contradictions between what she wrote back in the ’70s and what she thinks today, but she does not seem to have reconciled these contradictions. Lacking a self-reflexive quality to what might be memoir material, she asks the reader, “What would the young woman think of her older self?”

Unfortunately, one suspects this young Mira Schor might say exactly the same thing about her older self that she said about Judy Chicago in 1971—“She projects upon us [her students] bitterness and anger”—except the older Schor projects it onto young women artists lacking the same feminist conviction she once lacked herself. Her letters from Cal Arts reveal a student who resisted indoctrination by her established mentors, especially Chicago, so it’s surprising she isn’t more empathetic toward young women artists today who might feel conflicted and confused when interested but unsure about feminism.

This absence of compassion plays out repeatedly. It’s funny and strange how Schor concludes several chapters with disbelief, defensiveness, irritation, and frustration over the refusal of young women artists to stand up and proudly pronounce themselves feminists. Schor wants these women not just to value the work of feminist artists before them, but to continue to fight the good fight. Indeed, the whole section becomes a “she said, she said,” stoking the embers of a dying fire.

Still, while such traits will lead many readers to find her book disappointing, Schor stayed entrenched in the battle and deservedly gets to sound off about what is happening today around feminism in art. It’s just too bad more people aren’t on her side, that she is somewhat stranded in the middle generation she terms “2.5,” between second- and third-wave feminist art movements. She justly argues this group has been looked over, and it is time for us to take notice.