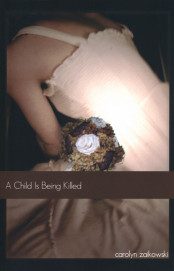 Carolyn Zaikowski’s novel, A Child Is Being Killed, tells the story of Shrap, a young girl sold by her father into sexual slavery. It is a story with little exposition, one that hurls the reader immediately into the sickening conditions Shrap must endure. However, while the violence of the book, both physical and psychic, feels unrelenting, Zaikowski manages to transform Shrap’s torture chamber of a text into a defiant struggle for survival. By doing so, A Child Is Being Killed both inhabits the terrifying space of its title while giving a singular, lyrical voice to its victim.

The novel opens with the line, “A beautiful woman asks me, what do the dead dream?” Within this line, the narrator lays out the dream logic that propels the book forward, the surreal twists and turns of Shrap’s journey, and the formal constructions Zaikowski uses to tell her tale. For if a child is being killed, and Shrap’s narration is a record of that moment, and that moment turns out not to be an instant but an eternity, then the line between life and death is forever soiled. This may be the dilemma for such a book: if hope is but a dream, and life a living nightmare, then what might it take for such a story, and its narrator, to survive?

A Child Is Being Killed is an experimental book, one that uses prose blocks and competing voices, fragmented consciousness and paratactic juxtapositions. In doing so, it refuses to allow the reader to capture Shrap’s story in a simplistic way—a move seemingly meant to mirror Shrap’s own refusal to succumb to her captivity, to give over her body and soul to those that corrupt it. While the novel might not be as successful in its innovations as it wants to be, it still undeniably impresses itself on the reader. You suffer alongside Shrap and you end up cheering the violence she summons against her captor in its climax.

Too often, violent novels ask us to relate to their monsters, be they Humbert Humbert, Patrick Bateman, or more recently, from Alissa Nutting’s Tampa, Celeste Price. In these books the transgressive is celebrated under the cover of satire, and the victims are often an afterthought, a construction of the monstrous voices that present them. In contrast, A Child Is Being Killed forces us to bear witness from the point of view of its victim. The healing at the end feels faint, and lines like “Even if someone loves you the world is still a dirty liver” seem to suggest how hard it is to be clean of such atrocities. But the book’s best success is the unflinching way it steers us away from melodrama and refuses the assurances of false hope.