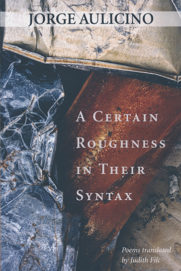 A foreboding sense of violence and loss pervades A Certain Roughness in Their Syntax, a collection of poems by Jorge Aulicino, one of Argentina’s most celebrated and distinguished contemporary poets. Marked by the experience of growing up in Buenos Aires as a grandchild of European immigrants, the poems in this collection blend and distill the sentiments, impressions, and violent images of various Latin American independence struggles, the “Dirty War” in Argentina, and the ideological battles of totalitarianism and fascism in Europe during the 20th Century. What distinguishes Aulicino’s poetic contribution to this troubling subject matter is the sheer velocity at which his poetry can move—in contrast to the comparatively slow and sometimes laborious plodding of novels or nonfiction. Aulicino can jump from one of these colossal themes to another within the space of a single line. Of course, one of the magical qualities of poetry is that it can span centuries and whole swaths of history within a few lines or single poem:

A sound turns the city into timber.
That’s how good resists the onslaughts of the desert.
In the dunes, in front of a temporary hole
bend those who know that the wind is their father mother
legitimate brother.

When the city flees like a vessel,
in its place resist the cliffs of the
ancient provisional dead.

Yet once again they watch the nomad surrounded by
hawk and hypogriff, parcae and grapes.

This is the one who will now speak and ask the reasons why
troys, babylons, thebes, stables and markets
are incessantly built and demolished.
Your own ghost will sit once again at your table; it will insist;
Don’t write.

Loss and abandonment are omnipresent here. And yet if art is supposed to transform experience and trauma into catharsis, one can never be too sure if Aulicino succeeds; rather, it’s as if one can only squint at the words through the smoke and haze of still smoldering rubble. Still, A Certain Roughness in Their Syntax deals masterfully with the catastrophic consequences of ideological possession, described in poems like this:

This land is not the land of my dead.
They went under the boots of hired killers.
They fell under the wire fence when the Tartars.
Used car salesmen and shellfish eaters,
they are now the lineage you offer me to choose.
Tell me, how could some chemist’s shop conspirators
give me passion and memories of the plough?
And yet, armies.

“And yet, armies” is a haunting refrain that recurs again and again in the collection. The Dirty War of Argentina, for example, which Aulicino lived through and witnessed firsthand in the late 1970s and early ’80s, marks the horrifying seven years in Argentinian history when a right-wing military junta—supported by the Ford and Carter administrations, who were invested in the geopolitical imperative of stopping the slow creep of communism in the global South—seized power and ushered in a horrifying period of state terrorism upon the people of Argentina. Military forces and government-sponsored death squads hunted down left-leaning political dissidents who held views opposed to the military dictatorship’s neoliberal economic policies and agenda. Fought on nakedly ideological grounds, these Washington-funded proxy wars in the global South were designed to demonstrate the superiority of free-market capitalism to the rest of the world. No matter how elevated or even transcendent the poems of Aulicino become in A Certain Roughness in Their Syntax, no matter how sweet the tune of poetry, the haunting refrain always returns: “And yet, armies.” The boots of infantrymen and paramilitary death squads have tread upon the stanzas of these poems and have stamped their footprints on the words and lines at every turn of phrase.

Aulicino’s poems are always godless. When religious structures collapse in a community they are sometimes replaced with a political or ideological utopia that serves as a sort of surrogate belief system. Aulicino witnessed in his own backyard some of the fiercest battles and most egregious atrocities of that process in the 20th century. But in these poems Aulicino sometimes seems to remember the gods. For example, he writes:

Last night you told me that great cosmogonies have no
creator gods. The world has nearly always emerged from
the destruction of the first titans.
And thus rocks are the bones of giants,
or men trickled from their open veins,
or the sea and rivers are remnants of their dissolution.
In this transformation of magnificent corpses
a gang nearly always rules with which alliance is advisable.
They don’t understand prayer. You must speak to them clearly.

The only moments that seem truly blessed in the poems of Aulicino disclose some kind of individual grace. Despite all those military boots stomping over his downtrodden poems, Aulicino nevertheless seems to believe that one can exist and even thrive outside the prevailing socio-economic orders of the time through some kind of heroic call to being. One poem, for example, describes a youth who takes to the sea: “Charter the ship, say your None prayers, take to the swell. / You’ve seen them; the roads are dusty prints, / why say no. Sail on the sea that smells of fuel.” The last line here is particularly telling: the boy must take to the sea despite the sea smelling of fuel that oozes from a tanker. Later on in the poem, Aulicino invokes the consumer goods of mass commercialization and globalization—those things so celebrated and championed by the neoliberal order vying still to this day for dominance in the global South: “See how they hoard in the fur business. / The ports, chock-full of red containers; / the overproduction of affairs and chips, / the silence of appliances, the sleeping software.” If the triumphant moments prove to be all too fleeting in A Certain Roughness in Their Syntax, those moments also reveal a moral core in the poems of Aulicino, one that holds sacred a faith in the heroic call to adventure, personal sovereignty over deadening ideologies, and sometimes even pure delight in sheer flights of ecstasy.