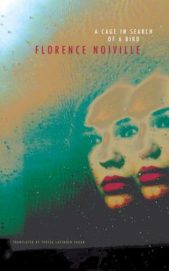 Florence Noiville’s A Cage in Search of A Bird investigates de Clérambault Syndrome by wrapping its peculiarities in the mantle of a psychological thriller. When television journalist Laura Wilmote sees her old friend and current co-worker “C” in their office one morning dressed entirely in a matching outfit, Laura “understood that something was wrong.” “Look! I’m dressed as you!” C exclaims, sounding in Laura’s mind “like a warning.” Expectedly, C’s infatuation grows to disturbing heights as Noiville’s cinematic novella unfurls.

C begins sending impassioned nightly emails to Laura recalling their teenage years, before they lost touch, when they would read Sappho together and explore New Wave Cinema. Laura grows increasingly uncomfortable with this new emotional intimacy and upon learning about de Clérambault syndrome, attempts to analyze C from a safe distance—all while channeling her obsession into something that could be used for a forthcoming TV feature, or, with a wink from Noiville, a future novel.

Noiville, a staff writer for Le Monde, has playful similarities to Laura and this self-referential game ultimately defines A Cage in Search of a Bird: the boundaries between narrator and author blur into a woozy unreliability and the novel twitches with the power of a mentally unstable confession.

De Clérambault believed that the only way to end a loop of erotomania is for one of its nodes to die: “either they destroy themselves . . . or they destroy the object.” This fatalism might be acceptable coming from an early-twentieth century psychiatrist devoted to this caliber of obsession, but seems unnecessarily excessive to utilize as a literary device. As Laura’s emotional fortitude breaks down and as C’s advances more effectively integrate her into Laura’s life, A Cage in Search of a Bird begins to fray. A perfunctory finale weakens this short novel, although it remains a fascinating, thrilling diversion.