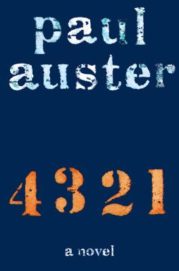 To an untrained ear, Paul Auster is the Aerosmith of experimental fiction, never altering the M.O. which carved out what Michael Dirda called “one of the most distinctive niches in contemporary literature.” All that’s followed his game-changing New York Trilogy has amounted to variation on a theme: The same spectral identities, Platonic halves, and coincidental realities can be found on any given page of any Auster novel.

Until now? Is this 866-page novel a departure from or career-culminating apotheosis of the offhand existentialism he’s been practicing for decades?

It is and it isn’t—and therein lies the both/and genius of Paul Auster’s 4 3 2 1. Though it carries the literal weight of a Tolstoy tome, for instance, it’s really more like three-and-a-quarter Auster-length novels (spoiler alert: one of the book’s four narratives ends abruptly early on). And the divergent paths of his fourfold protagonist Ferguson (spurred by quantum physics) are all linear, socio-culturally conditioned, and earthbound. A departure from and simultaneous reliance on his meta-magical approach, the milieu is more David Copperfield than The Garden of Forking Paths, and yet each of the four bildungsroman (and künstlerroman) is infused with the arch one-liners, heady cognates, and many-worlds magic with which Auster has come to be identified.
Reviews thus far have been mixed (in the protagonist’s terms, the book has received more “punches” than “kisses”). The most prominent complaints have been:

1) convolution – One reviewer needed a “crib sheet,” another a “spread sheet” to keep track of all the characters and their trajectories.

2) overdetermination – Do we need an exhaustive account of every leftist uprising of the ’60s and a laundry list of every author, entertainer, baseball player, love interest, and casual acquaintance the Fergusons encounter in his/their encyclopedic youth?

3) on-the-nose-ism – These are the critics who share James Wood’s impatience with anything “spelled out in billboard-size type.”

1) You are supposed to confuse the identities, not “keep track” of them.

2) The ‘60s was indeed “a decade so dense with tumult that it had given the country both Malcolm X and George Wallace, The Sound of Music and Jimi Hendrix, the Berrigan brothers and Ronald Reagan,” and the minute details (personal, socio-cultural, etc.) accrue to a gravitas and scope reminiscent of Roth’s American Pastoral.

3) Regarding what Auster himself recognizes as “the seriocomic tone that was necessary to pull off such outlandish narratives, the plausible implausibility of what he called nonsense in motion” . . . well, it either registers or it doesn’t. It’s neither the author’s success nor the reader’s failure when it hits or misses, though erudition assists in apprehending the “droll doubleness” of “The Scarlet Notebook” (Hawthorne/Auster-Quinn/workerism?), “Mulligan’s Travels” (Sorrentino/Swift/Sturges?), and all the “pungent puns” the author unabashedly offers up.

4) It doesn’t sound like Auster, it is (and isn’t) Auster. It has always been Auster aka Quinn aka Fanshawe aka Fogg aka Zimmer aka Ferguson “filling up white rectangles with row after row of descending black marks” and to pretend otherwise would be bad faith (so he never has.) As Auster said in his Fall 2003 interview with The Paris Review, “once you accept the ‘unreality’ of the enterprise, it paradoxically enhances the truth of the story. The words aren’t written in stone by an invisible author-god. They represent the efforts of a flesh and blood human being.”

Auster has always insisted that very little of his fiction is autobiographical, but whether the events and individuals who animate them can be fact-checked is irrelevant. They are nonetheless real, engendered by the emotional, physical, and imaginative (/mnemonic) life of Paul Auster. His books do not provide an escape from, but rather a plunging into the peripheral reality we miss when we are blindered by the brute facts of life.

It is exactly the fact that the voice sounds too much like Paul Auster’s that lends the weight of what is more or less made explicit in the final pages of 4 3 2 1 and has been given short shrift as a stock framing device. His recent autobiographical turn (Report from the Interior, Winter Journal) seems to be culminating here in an auto-fiction finale, as so many of the historical and personal “facts” check out. Edison’s anti-Semitic termination of his father, the boy struck by lightning, (step-)sister who snaps, remarried mother, basketball game turned race riot, Maplewood, Columbia, etc., etc. Never has so much been based on the lived reality of Paul Auster. Something he said in a Telegraph interview (just after the first volume of Winter Journal had been published) may be instructive here: “I used to have a backlog of stories, but a few years ago I found the drawers were empty. I guess I’m getting to the point where I tell myself if I can’t write another book it’s not a tragedy.”

The four Fergusons seem to have originated in that void. Their host, who unveils himself in the denouement, is a familiar and unfamiliar figure, one who is and isn’t the being whose birth certificate bears the name Paul Auster (assuming that’s his real name), the 1 who will not endure the endless loops his alter egos retrace with each new reader rendezvous. Though to be clear, it is pure speculation, not spoiler, to imagine that 4-3-2 are other fictional selves and 1 = Auster, “the last man standing.” And yet the closing gambit at least intimates a vocational endgame. It is and/or isn’t Prospero drowning his book. The author is saying goodbye to all that; his autobiographical (re)turn has and hasn’t come full circle to that (re)invented Solitude, because when had he ever left the well-lit room (pen or book in hand) to begin with?

If you do not have a pre-existing relationship with Auster and his avatars, you may not feel bereft at the conclusion of 4 3 2 1. If, on the other hand, you have been his dear reader, you will live the lives and die the deaths of Ferguson cheek by jowl until there’s just you and 1, sitting alone in the vacated premise, closing the book on not just hours, but decades of intimacy at a distance.