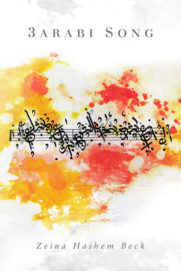 Zeina Hashem Beck, winner of the 2016 Rattle Chapbook Prize, writes complex poetry about her Arab culture—verse rich in detail and metaphor. A native of Tripoli, Lebanon, now living in Dubai, Beck is a performance poet who integrates Arabic and French words into musical, skillfully crafted poetry of love, longing, and diaspora.

In order to make the poems more accessible, Beck includes a page of translation and background notes, and if the reader takes time to read these, the poems indeed come more alive. For example, several words in the poems are Arabizi; the author says “3arabi is the Arabizi way of writing ‘Arabic.’ ‘Arabizi’ comes from the combination of the words ‘Arabic’ and ‘Englizi’; it uses numbers to represent sounds that are specifically Arabic.” Unfortunately the author does not explain how to pronounce these sounds, but that’s a minor distraction in these culturally rich texts.

“Listen,” a poem shaped like an hourglass—or explosion—tells of fear and terror as each stanza repeats itself in reverse order, like a movie replaying itself backwards:

Not even the gods could, who could have possibly—I mean listen:
the sea, still; the children; the figs almost bursting,
viscous—this August heat; the city, the day
flows, ebbs; the Chiclets in the street
boys’ arms, the sumac, noon,
the laundry, the domes of
the mosque, this Friday
it explodes
did you
hear
that?

Some readers may find this form too clever and gimmicky and the unconventional punctuation distracting; however, the form is effective in evoking the terror of a bombing. Beck also pays attention to conventional form, as in “Ghazal: The Dead”:

You asked about the men chanting to Allah on the plastic chairs—
Were they real? Were they grieving the dead?

You wanted to linger, to listen, to dance beside
their voices, this believing, the dead.

In “Ghazal: Back Home (for Syria, September, 2015)” Beck writes of the tragedy of diaspora in the voice of refugees. “Bahr” is Arabic for sea:

Tonight a little boy couldn’t walk on water or row back home.
The sea turned its old face away. Again, there was a no, no, back home.

Zeina Hashem Beck’s poetry is edgy, scholarly and multi-cultural. At a time when Arab and Islamic culture is under attack from xenophobes and ideologues, her verse provides hope and portent. As she aptly says:

The heart—
never learns
keeps coming back
to the same songs,
the same wars.