in conversation with Curtis Sittenfeld 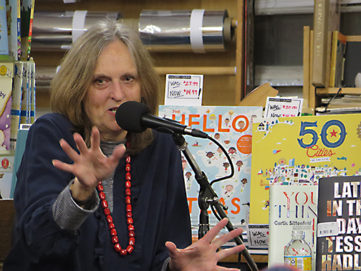 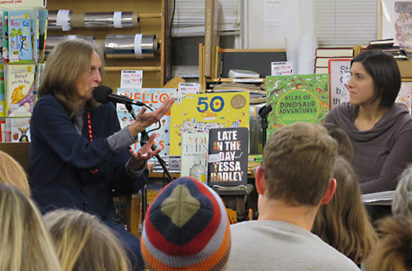 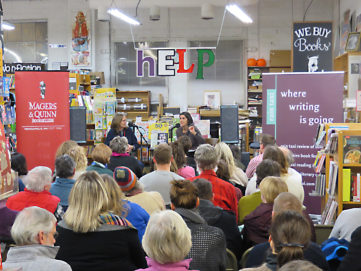 British author Tessa Hadley and newly-local author Curtis Sittenfeld had a lively discussion about Hadley's new novel, Late in the Day, as well as writing habits, novels vs. short stories, and much more before a packed crowd on a chilly winter night. 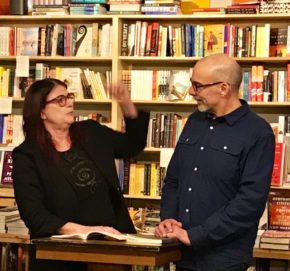 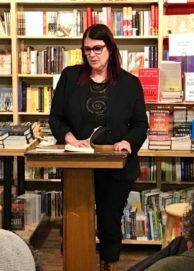 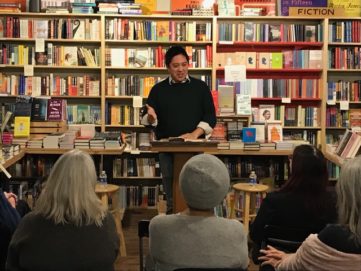 Poet Claudia Keelan entranced with a reading from her selected and new collection, We Step Into the Sea, along with some selections from her translations of poems by women troubadours from Truth of My Songs: Poems of the Trobairitz, with the help of audience members. Keelan was joined by local poet Chris Santiago, who warmed up the crowd with poems from his recent book, Tula. A splendid time was had by an overflowing crowd at the book launch for Ed Bok Lee’s Mitochondrial Night, with DJ Nak providing music and opening poets Saymoukda Vongsay and Donte Collins helping to kick things off. The event, free and open to the public, was co-sponsored by Literary Witnesses, Rain Taxi Review of Books and Korean Quarterly. 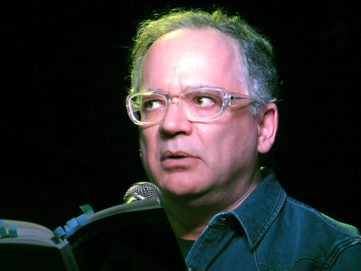 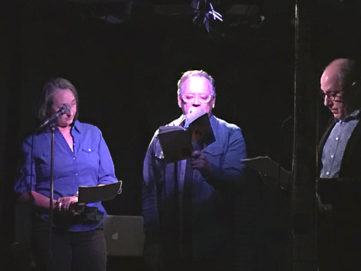 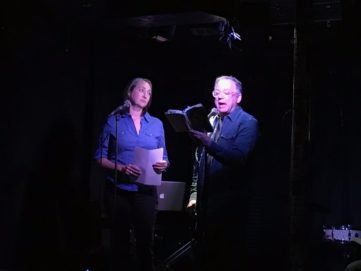 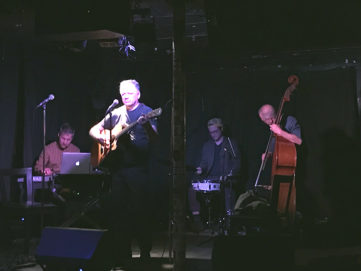 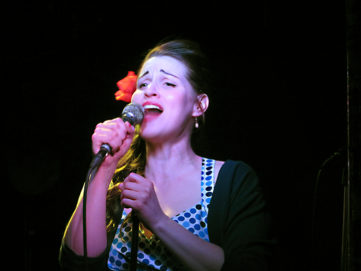 LA playwright Don Cummings presented his new memoir, Bent But Not Broken, with panache, humor, and music! He was joined onstage by local actors Mo Perry and Craig Johnson, who portrayed members of the medical establishment as Cummings documented in hilarious detail his experience with a serious medical malady, Peyronie's Disease. Did it get him down? No, it did not! Don also performed an original ballad, and guests were entertained by the Debbie Briggs Vintage Jazz Combo, featuring Briggs (vocals), Jeffrey Sugerman (upright bass), Sam Kjellberg (percussion), and Bernie Wollenberg (keys). Poet Carolyn Forché held the audience under a spell as she recounted her experiences in late-’70s El Salvador, a witness to the death squads and horrific events leading up to the war. Her new riveting memoir, What You Have Heard Is True, details this moment in history, and everyone present felt that they were there with her. Forché was joined by Rain Taxi editor Eric Lorberer to discuss her work. A limited-edition signed broadside of an excerpt from her book was created for this event, and is available for purchase. See here for details!

See the recap and winners here! 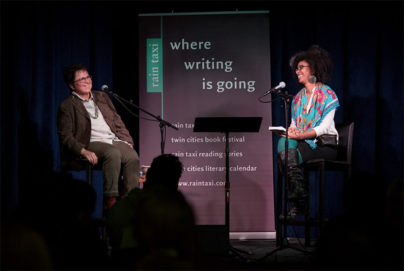 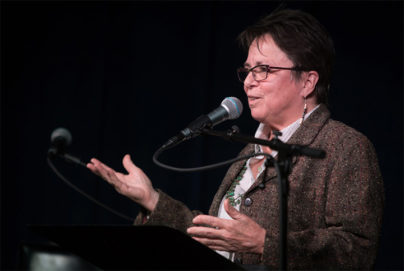 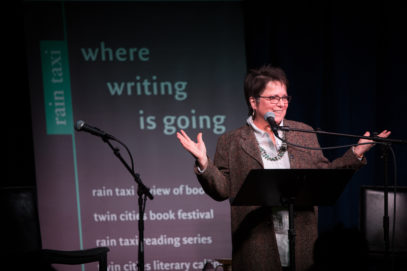 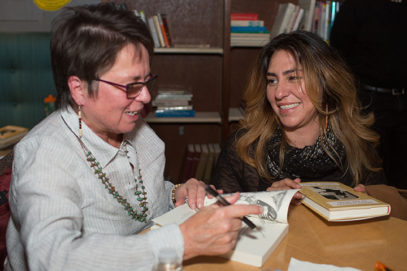 An adoring crowd warmly welcomed author and activist Cherríe Moraga as she presented her new memoir, Native Country of the Heart. She was joined on stage by Alexis Pauline Gumbs for a lively discussion of her work and impact on the queer and Xicana communities. Icelandic author and eco-activist Andri Snær Magnason discussed his wide-ranging work with Rain Taxi editor Eric Lorberer, including his newest novel The Casket of Time. His work bringing awareness to the calamities of climate change brought him close to winning the 2016 Iceland presidential election. He continues his activism through his talks and writings. View a recording of this talk HERE! 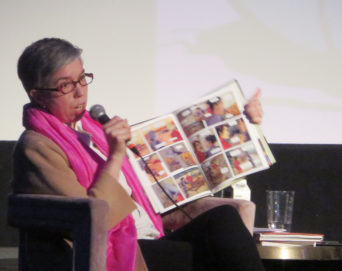 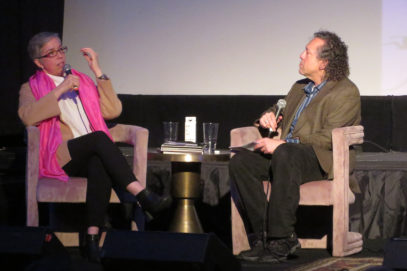 Champion of comics and creativity, Jessica Abel gave a presentation about the making of her new comic, Trish Trash: Rollergirl of Mars. She also sat down with Eric Lorberer to discuss her work as a comics artist and maven of creative steadfastness. This event was part of a Symposium on Meme Culture and Comics. Earlier in the day, a group of cartoonists, illustrators, storytellers, and a publisher gathered at Moon Palace Bookstore to discuss and make sense of current trends and speculate on future directions of comics in the digital age. Participants included: Shannon Wright, Blue Delliquanti, and Greg Hunter, moderated by Caitlin Skaalrud. 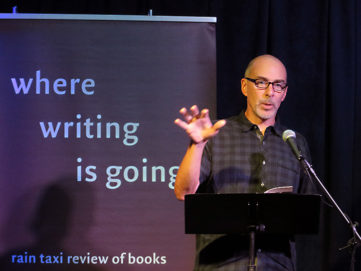 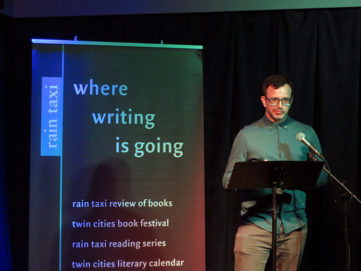 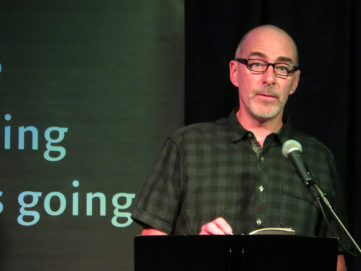 Award-winning author of the best-selling Ibis trilogy made his first appearance in Minneapolis on the occasion of his newest novel, Gun Island, a folkloric adventure novel about family and heritage. Ghosh read from his book and engaged with audience members on many topics, including his activism in the global warming threat. 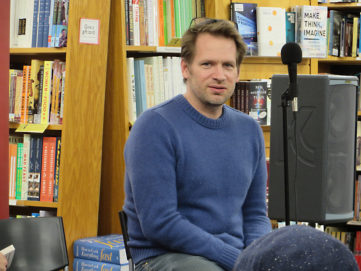 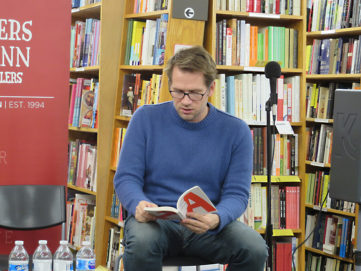 John Freeman — literary critic, editor, and poet, read from his new book of lyrical essays, Dictionary of the Undoing. He talked about literary activism that provide positive answers to the current political stresses. Freeman was joined by local poet-activists Wang Ping, David Mura, Chris Martin, and Hawona Sullivan Janzen, who discussed how poetry in particular creates community and draws in a multiplicity of voices.