A Tribute to Denis Johnson 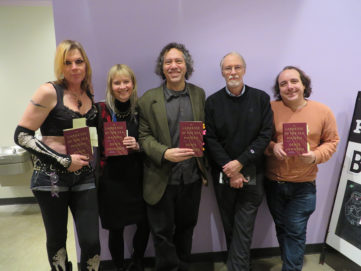 Many gathered to elebrate the life and writing of Denis Johnson, who died on May 24, 2017. Best known for his 1992 work of fiction Jesus’ Son and his 2007 National Book Award-winning novel Tree of Smoke, Johnson was also the author many other works of fiction, poetry, drama, and journalism. Charles Baxter, Venus DeMars, Lynette Reini-Grandell, Eric Lorberer, and Sean Tillmann (aka Har Mar Superster) read excerpts from Johnson's posthumous book of stories, The Largesse of the Sea Maiden (Random House), which the author finished shortly before his death. The evening wrapped up with Venus DeMars's heart-wrenching version of Lou Reed's Heroin. 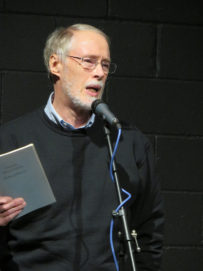 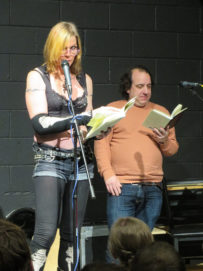 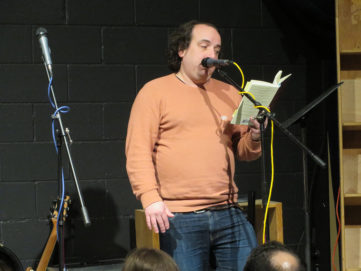 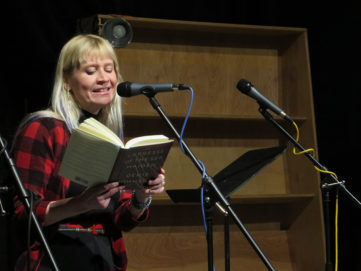 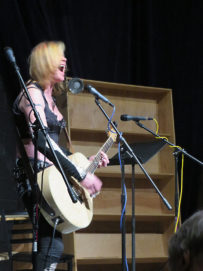 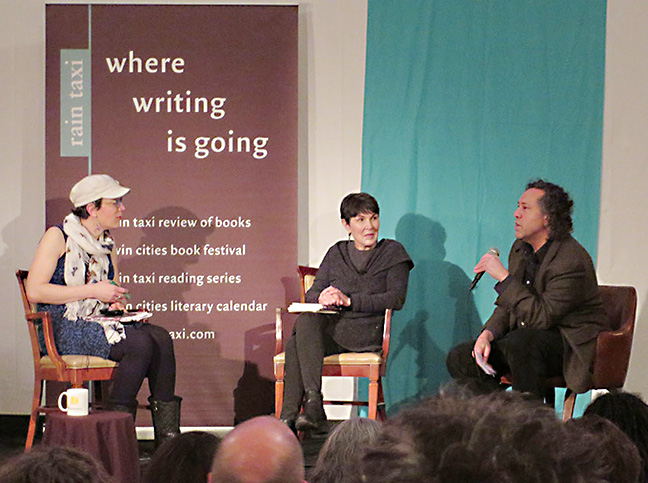 Graywolf Press poets Mary Jo Bang and Stephanie Burt read from their latest collections of poetry. Bang read poems from her new book A Doll for Throwing, and Stephanie Burt read from her new book Advice from the Lights. The poets then sat down to talk with Rain Taxi editor Eric Lorberer, providing insightful and eloquent commentary on their own and each other's work. A brilliant evening of poetry! 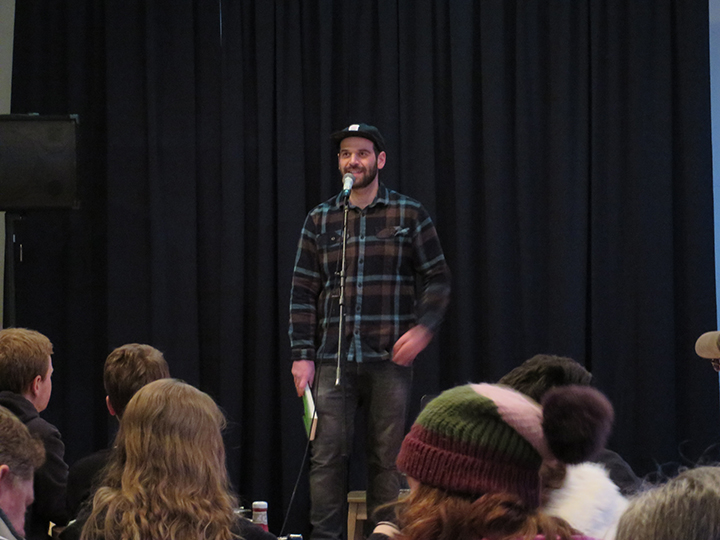 A lively crowd gathered to hear Peter Stenson read from his new audacious and austere novel, Thirty-Seven, which follows the final living member of a cult called The Survivors. Peter was then joined by Rain Taxi editor Eric Lorberer for a discussion about the creation of the book, its inspiration, and his writing life along the way. 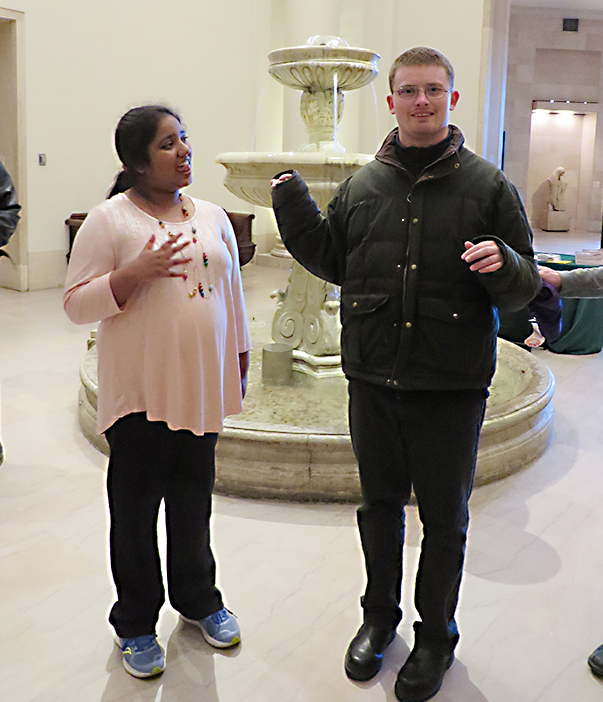 Many supporters joined Rain Taxi and the Autism Society of Minnesota to celebrate the publication of DJ Savarese’s chapbook A Doorknob for an Eye and watch the feature film Deej, a heart-felt and candid look at DJ's challenges and victories as he lives with autism. The evening concluded with a Q&A session with DJ himself. DJ was joined by local poet with autism, Meghana Junnuru, who addressed the crowd with her thoughts about how the movie inspired her. 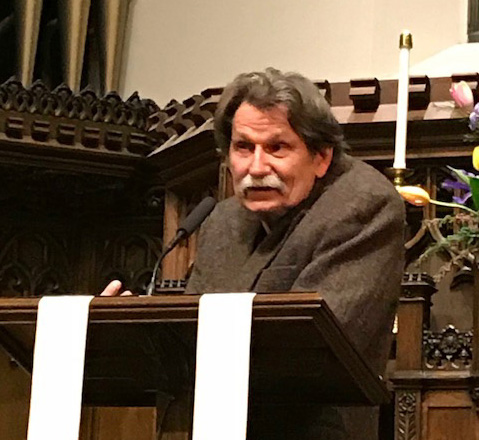 Literary Witnesses and Rain Taxi presented phenomenal poet Gregory Orr to an enthusiastic audience. Orr read new poems addressing "the beloved," and discussed his writing life. This event celebrated his latest book, A Primer for Poets and Readers of Poetry, and marked the 20th anniversary of Literary Witnesses. 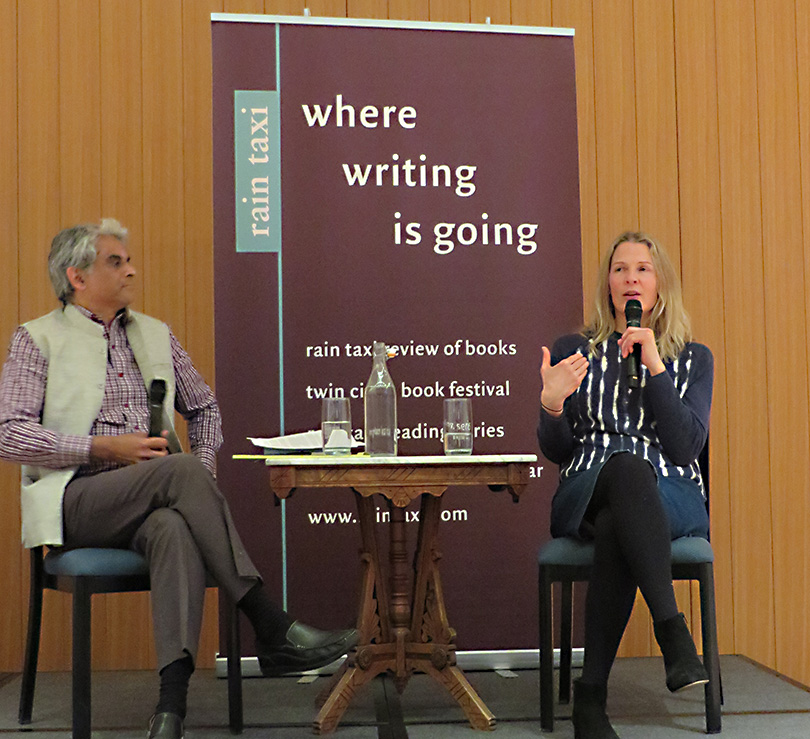 Celebrated Norwegian journalist Åsne Seierstad was joined by local PBS Newshour journalist Fred de Sam Lazaro to discuss her new book, Two Sisters: A Father, His Daughters, and Their Journey into the Syrian Jihad. The two had a lively discussion, digging deep into the complex story of two sisters leaving their family in Norway to join extremist Islamic militants, delving into how a journalist can remain objective in the face of such a controversial story. 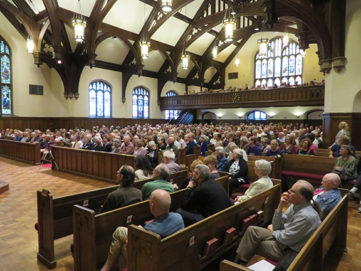 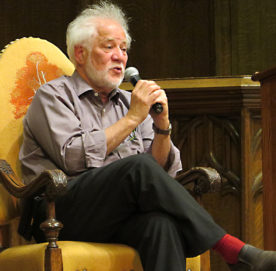 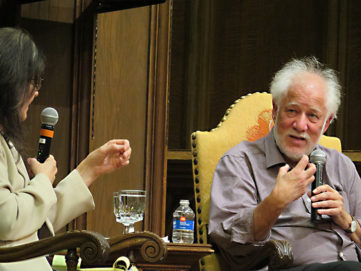 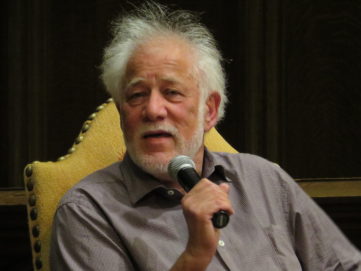 People filled the Sanctuary—over 500 strong—to see and hear Michael Ondaatje read from his newest novel, Warlight. Ondaatje read a stirring passage, one included in the limited edition, signed broadside created for this event. Louise Erdrich then joined Ondaatje on the stage to discuss his work, delving deep into the creation of Warlight. This event was co-sponsored by Birchbark Books and Literary Witnesses.

Booklovers braved the intense heat to browse used and rare books and records at Print Matters, presented by Rain Taxi Review of Books! Formerly known as the Twin Cities Antiquarian & Rare Book Fair, and still sponsored by the Midwest Antiquarian Booksellers Association, Print Matters drew the hardcore set on Friday, eager to peruse the rows of enticing titles on display, get a free letterpress coaster from Monica Larson and Sister Black Press, enjoy a game of Giant Word Cross, get their cards read at Poetry Tarot, and play the Scavenger Hunt to win a Print Matters tote, which can be purchased here, and oodles of prizes. Live music added to the festive Friday evening, with performances by jazz flutist Sean Eagan, writer and ivory tickler Dylan Hicks, rockin’ Mike Michel, modified banjo impresario Paul Metzger, and groovin’ Jon Rodine. 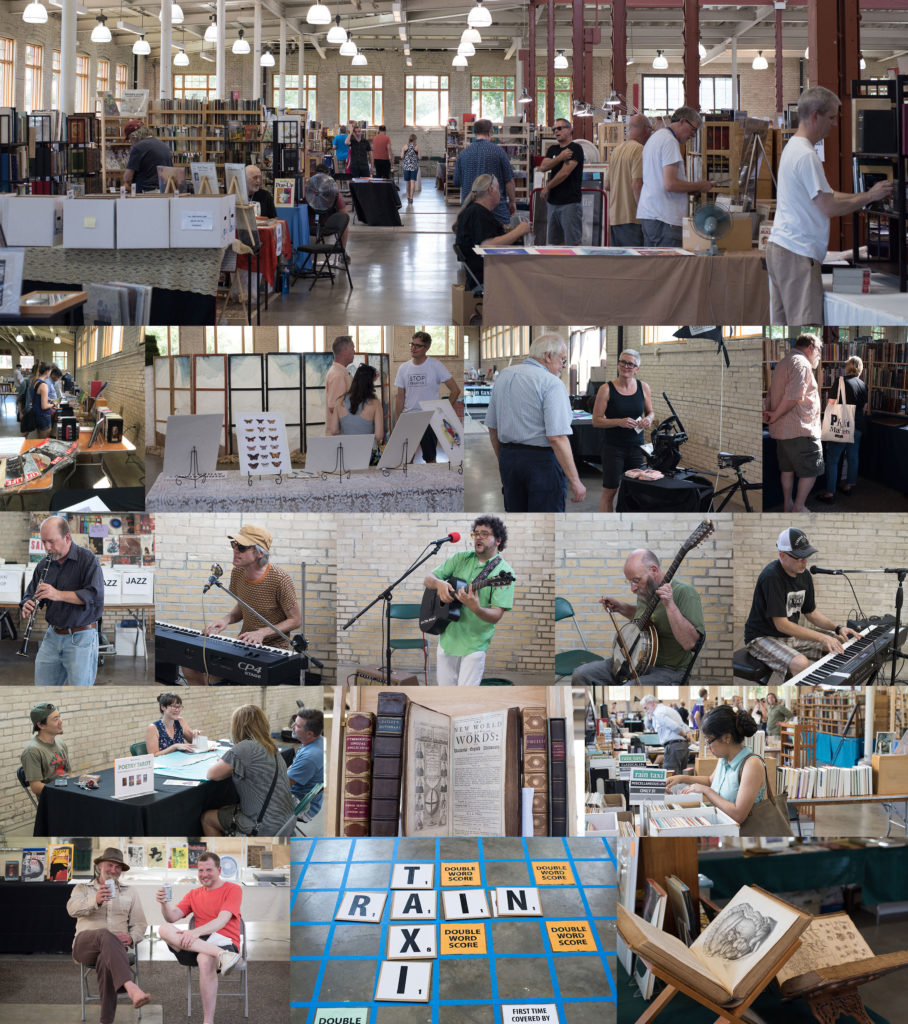 discussing Zen and the Art of Motorcycle Maintenance
Thursday, June 26 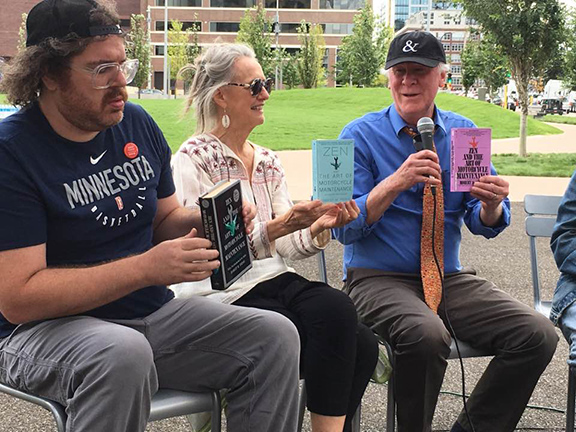 An attentive group joined discussion leaders Patrick Coleman, Nor Hall, and Steve Marsh along with Rain Taxi editor Eric Lorberer to riff on the bestselling 1974 book by Robert M. Pirsig, who wrote it in the late Robert's Shoes building in Minneapolis. The book was lauded for its philosophical rigor and denigrated for its narcissism and derivative ideas. Whether you love it, hate it, or never finished reading it, you can't deny the imprint it made on American culture. 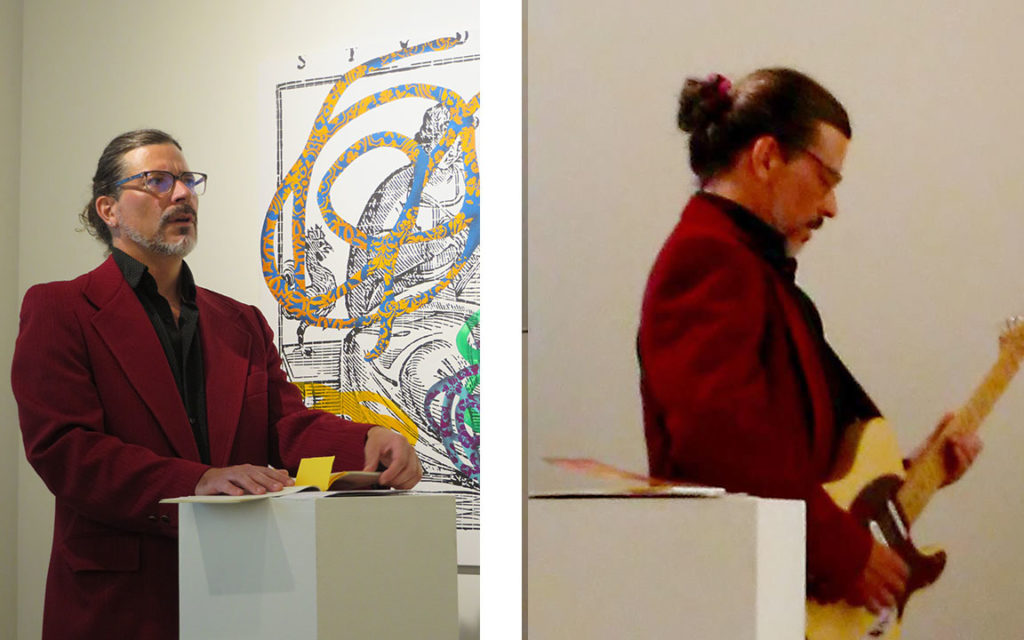 Rain Taxi celebrated the publication of Elizabeth Gregory, a chapbook of poems that combs the inner space of every mom in search of radical humanity. Elizabeth Gregory is one of millions currently living with early onset Alzheimer’s dementia (EOAD). Carollo presented a multi-faceted look at life with this devastating disease—through poetry, video, music, writing exercises, testimonials, and a communion of sorts bringing the audience together to mourn, honor, and recognize people experiencing “the long goodbye.” 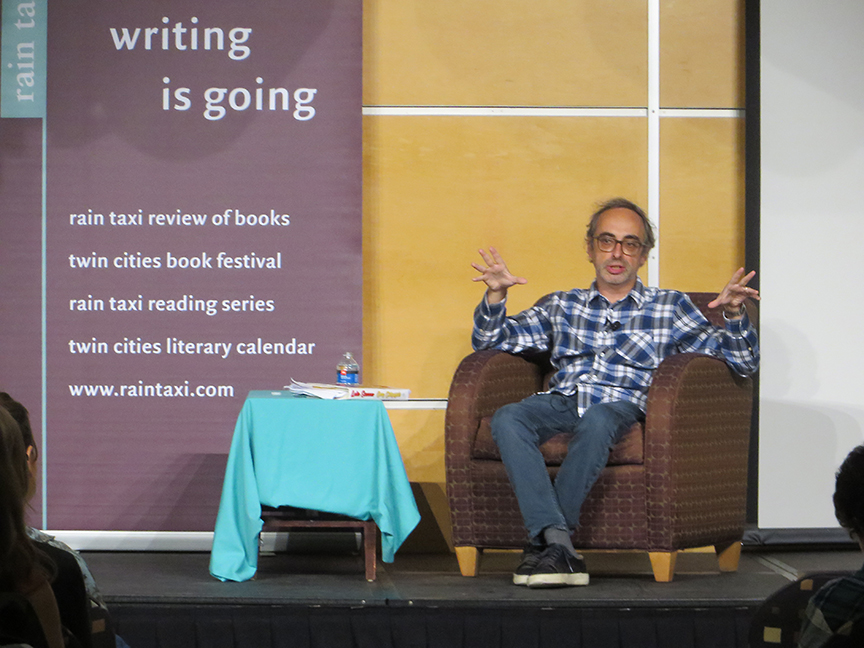 Gary Shteyngart returned to the Twin Cities to present his first novel in eight years, Lake Success, which has been garnering rave reviews throughout the country. Shteyngart entertained the crowd with this satirical take on the disintegrating world of a hedge fund manager who attempts to escape his life on a Greyhound bus across the country. Shteyngart regaled with stories about his own trip across the country on "The Dog," seeing a side of America that reveals great beauty and great division. 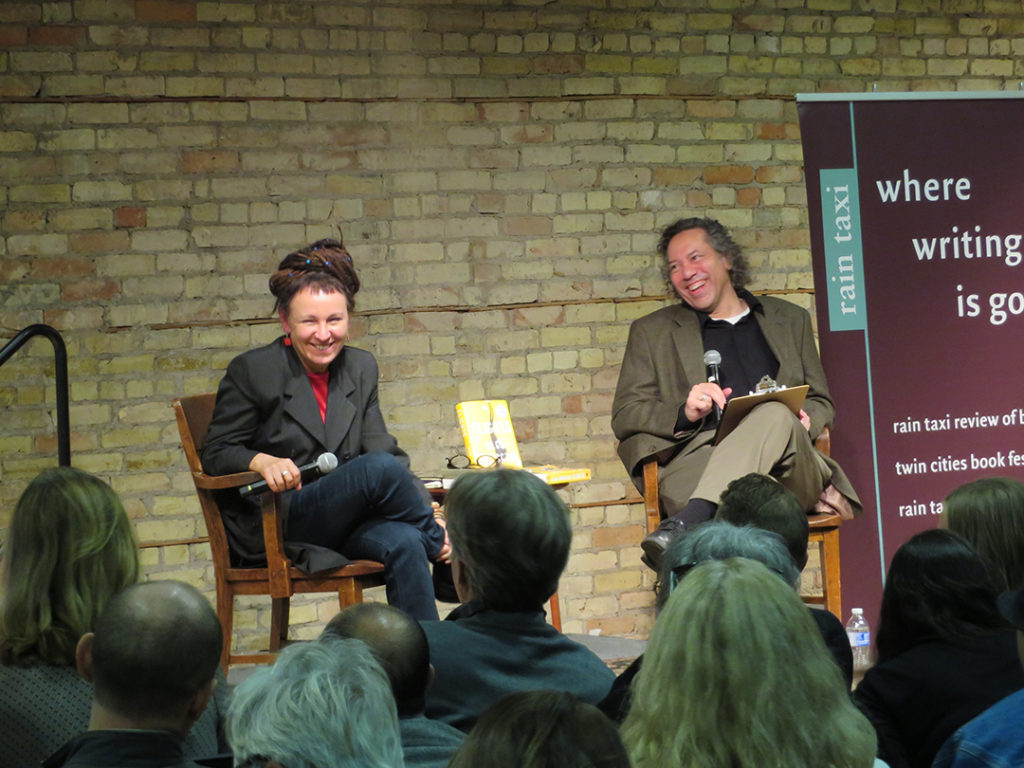 Polish author Olga Tokarczuk presented her Man Booker International Prize winning novel Flights in conversation with Rain Taxi editor Eric Lorberer. The two discussed the many themes woven into this tapestry of fragments, stories, observations, and historical re-imaginings. A capacity crowd enjoyed this lively conversation that spanned many countries and languages. The event was co-sponsored by PACIM (Polish American Cultural Institute of Minnesota). 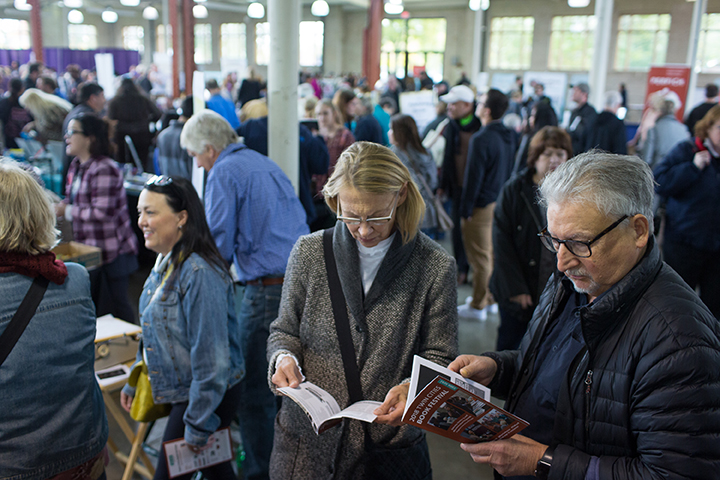 Another successful Festival! See our recap and all past festivals HERE! 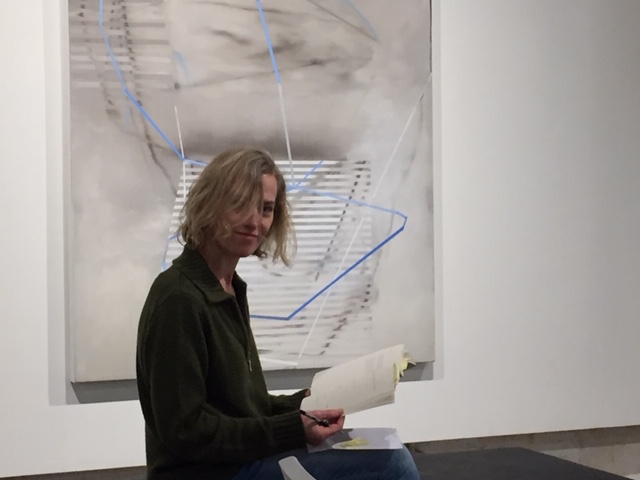 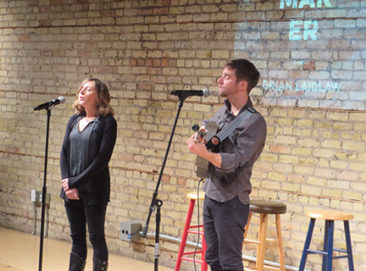 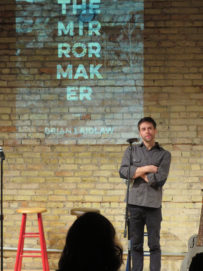 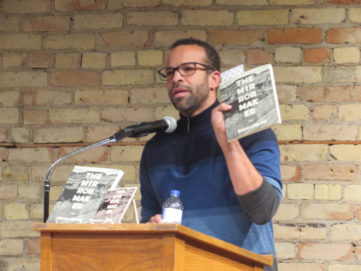 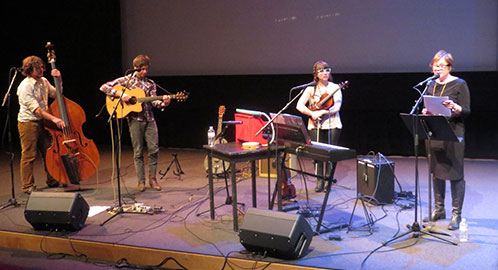 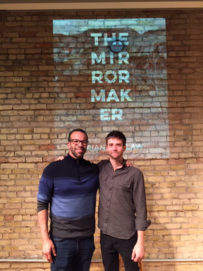 Modern-day troubadour Brian Laidlaw was joined by poet Douglas Kearney and Obama Foundation Fellow Ashley Hanson to celebrate the book-launch of his new book from Milkweed Editions, The Mirrormaker. Poetry, music, and laughter mixed in an alchemy of goodness, as the performers gave their all and wowed the crowd. Co-sponsored with Milkweed Editions.
new winter print issue!