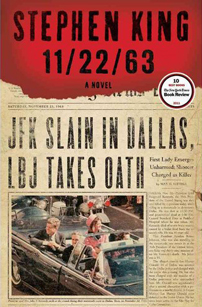 Genre bending isn’t exactly something Stephen King is known for. A master of the macabre and occasional practitioner of science fiction, King’s work tends to attract the reader with a darker sensibility. Sometimes he’ll sneak one by you, like the touching Hearts in Atlantis or the ode to childhood imagination The Girl Who Loved Tom Gordon, but even that positivity and inspiration is seen through a darker lens. His newest work, however, 11/22/63, is something entirely new, a work closer to historical fiction than science fiction. If you’ve been waiting for a more accessible opportunity to enjoy one of the most prolific scribes of the last half-century, there’s never been a better time than now.

Jake Epping is a flawed man. Recently divorced, Jake teaches high-school English. He also works with adults seeking GED’s, a way of earning a little extra scratch to get by. One day, casual acquaintance and owner of the local grill, Al Templeton, lets Jake in on a secret. The storeroom of his diner is a gateway. Whenever someone steps through it, they emerge in the past—September 9, 1958, to be precise. Every time.

Don’t worry. The more technical discussion of time-travel, in which scientific theory and jargon awkwardly cascade from a characters lips, never comes. This is not a story about the intricacies of time-travel. King develops the rules to his world relatively quickly, never lingering too long on the minutia. The result is a story that skips the headaches associated with similar plots, and instead focuses on the action at hand.

Templeton passes down his mission to Epping: travel back to 1958, move to Dallas, and prevent the impending assassination of President Kennedy in 1963. While initially reluctant, Epping eventually embarks on his journey, forced to live five years in the Cold-War past. This is where the novel truly shines.

King first attempted to write this book in 1971, just after the release of his first novel, Carrie. While he loved the concept, he found the actual work overwhelming. Reading the completed novel now, it’s easy to see what was so intimidating. 11/22/63 is a dense piece of fiction. Every little stick of information is the product of tireless research. The 1958 price of a pound of ground beef and a root beer. The arrangement of downtown Dallas. Even the detailed description of Lee Harvey Oswald’s apartment, where Epping watches him prepare to change the world. The amount of time that’s been put into building a realistic portrayal of the country is staggering. All the while, Jake’s driven to increasingly extreme measures to accomplish his objective. The tension is a slow build, but it keeps the action tight.

It’s the intense research, the fully-realized world of the mid-twentieth century, that makes the novel a unique accomplishment. If you haven’t let yourself crack open one of King’s novels before, 11/22/63 will capture your imagination in a way you might not expect, while the diehard King reader will find the same humanity and style that makes him one of the most popular writers of our time.